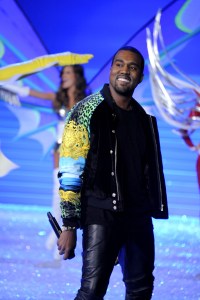 Steve McQueen, artist and acclaimed director of 12 Years a Slave, recently spoke with the rapper of many slashes (/fashion designer/director/producer/etc.) Kanye West for Interview, touching upon topics biographical (Mr. West’s near-fatal car crash, the birth of North), controversial (his public meltdowns, or what he prefers to call “turn-ups”) and zodiacal (did you know that he, Prince, Tupac, Biggie and Miles Davis are all Geminis?), as well as fine art.

After Mr. McQueen asks Mr. West about the aesthetic components of his career, Mr. West recalls his history with visual art: “Well, I’m a trained fine artist,” he says. “I went to art school from the time I was 5 years old. I was, like, a prodigy out of Chicago.” Mr. West goes on to mention various national competitions and the scholarship that brought him to the American Academy of Art. Then the reveal. “So the joke that I’ve actually played on everyone is that the entire time, I’ve actually just been a fine artist. I just make sonic paintings, and these sonic paintings have led me to become whatever people think of when you say ‘Kanye West.'” He dips into a discussion of Madonna, before moving on to his collaborations with artists Takashi Murakami and George Condo (who have done album covers for Mr. West and, more recently, customized a Hermès Birkin bag for Kim Kardashian).

“I like to collaborate with different masters,” he says.

You can read the whole conversation here.