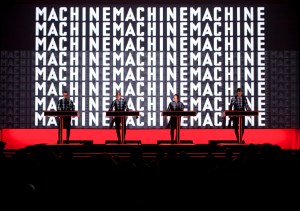 Remember the spring of 2012? Ah, those heady days when it was still possible to have a little more hope in mankind, a little healthier outlook on one’s own future and a general inkling that life might work out for the best in the end. (Still worked here, though.) Nothing like time slipping away to remind you that the only thing you can count on in the end is death and that in the interim what awaits you is a systematic monotony so banal that it actually physically hurts to get out of bed in the morning and the string of endless disappointments buffered by maybe a couple hours in total of satisfaction effectively erases any memory of the smallest glimmer of pleasure leaking through the dull, inexplicable grief of having to live every day, having to fill all those hours with nothing but a sense of lost purpose. This is merely to say that Kraftwerk–which had an eight-night residency at the Museum of Modern Art in April 2012, the reason for a string of regrettable sentences on my part (“The members exited the stage one by one, each first performing a keyboard solo that the audience applauded the same way they would an electric guitar break or a hard bop sax piece”)–have announced an expanded list of 2014 tour dates. You can see them here.