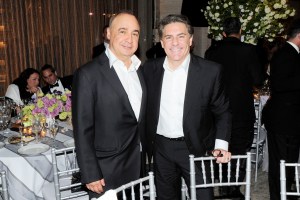 Have you read Connie Bruck’s profile of Ukrainian-born oligarch Leonard Blavatnik in The New Yorker yet? It’s pretty great—filled with juicy tales of extravagant parties and high-stakes business deals cut in those halcyon days when Russia was rushing to privatize its state industries. Not too much about art in there, but we do get a little nugget about Mr. Blavatnik’s collecting habits, below:

The British publisher Lord George Weidenfeld, a close friend, told me that Blavatnik has been “systematically collecting very good art recently—contemporary art, and also a Modigliani, one of the best I’ve seen.” Not long ago, Blavatnik showed a guest one of his acquisitions, an Enigma encryption device that the British captured from a German submarine in 1941. As the guest admired the machine, Blavatnik warned, “Don’t touch it! It cost a lot of money!”

Give it a read! (Subscription required.)