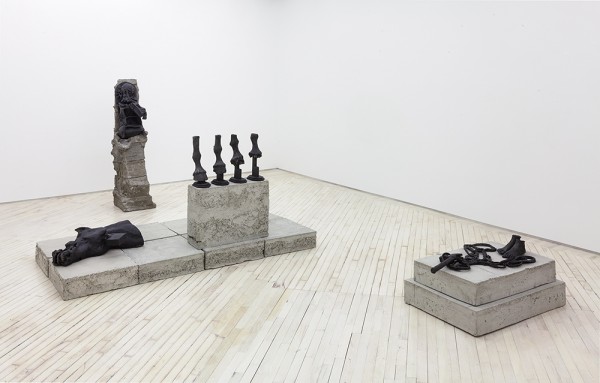 There’s always a moment of apogee in decay, a transitional pause in which it’s difficult to distinguish the forms breaking down from the forms just beginning to emerge. The iron and concrete elements of Lionel Maunz’s “Deluge,” named after Paolo Uccello’s unusually violent fresco of Noah’s flood, arranged in densely significant tableaux just adjacent to clarity and cast from foam models of rotting horse hooves, miniatures of apartments and trailers Mr. Maunz grew up in, an earlier piece not in this show (a sphinx carved out of sulfur), and his own feet, are too brutally heavy to belong to any but an eons-long change. But their formal ambiguity, critically emphasized by rough, patchy surfaces, insists that however finely or slowly we parse it, civilization can’t be separated from its own brutality.

Cone of Erebus, in the front room of Bureau’s huge new Norfolk Street location, is like a nightmare pilgrim’s progress. It begins with a narrow, dark gray pillar, about the size of a stick of butter and as approximately square, on a flat, three-step pedestal on the floor. This small pillar presents a smooth face, but its back is eaten away as if by a wasting disease. A few more rough iron pieces in a pile lead to a long ball-and-socket joint like a burned matchstick or an emaciated horse’s leg, and then another, terminating in a pandemonium in which a concrete form like a crumpled balloon, with bulging ribs and spots of pink, rests in the linear grip of more stolid iron bars. In What Crawls Must Be Crushed, an iron form like the frame for a giant hourglass rests on a concrete pedestal shaped into staves, bands and rivets. In place of the hourglass, though, resting between stacked and dependent ingots, is a drooping human foot.

In the back room, Mr. Maunz confronts the ambivalent legacy of horsepower and metallurgy still more explicitly. Concrete pedestals in short stacks and truncated pyramids like prepharaonic Egyptian tombs support cast-iron hooves, a hammer, a bridle and farrier’s pliers. In Regime, eight square blocks make a flat pallet for a trophy-like row of pasterns, each with less hoof than the next, and an impaled horse’s head on its side, its teeth silvery gray and skull half exposed by rot. The mood is serious, but so is the material: This is the god that exalts us as we murder him.