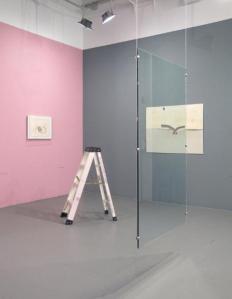 After a year of baleful extravagance in galleries and on the auction block, gargantuan and largely mediocre blockbusters in our museums and the continued hypertrophying of the worst aspects of the art world (spectacle, conservatism, anti-intellectualism), it is a joy to visit this year’s edition of White Columns’ venerable Annual, which has been organized by Pati Hertling, a restitution lawyer, associate of New York and Paris’ Balice Hertling gallery and host of various art events around town. Her exhibition is a poignant tonic for such nonsense, filled as it is with intimate, hand-fashioned, quietly risky art.

There’s not a full-on Chelsea art star in sight, except maybe Rosemarie Trockel, who is represented here by a mysterious photo of a male torso, paired with a cast of meat, which she showed in November at the Gladstone Gallery (Ms. Hertling saw almost all of these works over the past 12 months), hitting themes, like vulnerability, the body and identity, that permeate the show. Instead of overexposed names, we get the octogenarian Cuban master Zilia Sánchez, whose pulsing, bodily, interstellar abstraction is made with an obsessive array of dots, the late, great Hannah Wilke (a stick of gum, streaked with pastels, whipped into a sexy little curl) and mid-career artist Alicia McCarthy, a San Francisco abstractionist who has painted a mysterious rainbow on a discarded bit of wood. (Women outnumber men here, in a reversal of entrenched curatorial practice.)

This art eschews big-budget dazzle for subtle, slow-burning effects, exemplified by feminist pioneer Mary Beth Edelson’s 1972 Honey Painting, whose namesake food drips at a glacial pace from a panel down the wall. This is elegiac art, alluding to time passing and now-vanished performances. There’s a small collage advertising a show by the No-Neck Blues Band, a ghostly jar of film pickled by Tony Conrad in 2006, documentation from a 1981 outdoor action by Senga Nengudi and a poem by the mad-hatter wordsmith Karl Holmqvist to denote a reading that Ms. Hertling attended. Superb on their own, these pieces also serve as clarion calls to make it out to such performances, where so much of today’s most interesting work is happening. A variety of screenings and performances by young talents—Loretta Fahrenholz, Dawn Kasper, Marie Karlberg, Ei Arakawa and others—are planned for the coming weeks. 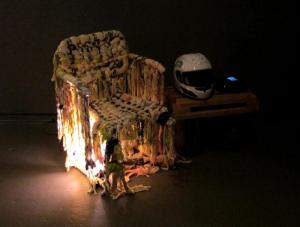 If there’s one thing that may make some visitors bristle, it’s the clubiness of the artists here, who are centered on a few closely aligned galleries: Reena Spaulings, David Lewis, Greene Naftali and a handful of others. But we need shows that take stances and operate with honest discrimination. That’s how we relate to art: sorting and ranking it, sifting out the things that affect us. Amy Yao’s goofily gorgeous pink stepladder, emblazoned with decals about the Internet and the schedule for still other performances, fits the bill; so, too, does the bulky white motorcycle helmet that Sergei Tcherepnin has wired with transducers so that its wearer can be wrapped in electronic music.

Ms. Hertling’s Annual offers the chance to revisit artworks shown during 2013 and discover some that you might have missed. But even better, it gives plenty of reasons to be optimistic about 2014.