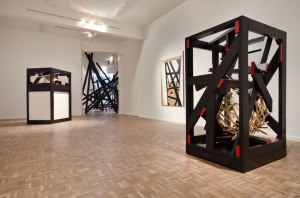 Ms. Boesky said she’d read about Mr. Nitegeka, who has shown at the Palais de Tokyo, and set up a studio visit when traveling in South Africa last summer. “Rarely do I connect so viscerally with an artist and their work as immediately as I did with Serge,” she wrote in an email.

Ms. Boesky plans to introduce Mr. Nitegeka to the United States with a solo booth at the Armory Show, one of his installations that, Ms. Boesky wrote, “physically bisect three-dimensional space and use the viewer as a further disruptive variable, resulting in a tableau vivant of sorts, with the individual as both viewer and performer.” So be on the lookout for that!