Emerging after a 45-minute meeting at the cardinal’s residence in Midtown, the ever-jolly Mr. Dolan and an excited Mr. de Blasio talked about how much they had in common, including a desire to bring the new pontiff to the city for a visit.

“We have a common passion and a common wish: We hope that some day Pope Francis will visit our city and [offer his] extraordinary blessings for New York City,” Mr. de Blasio told reporters.

“Like so many people all over the world, I have been inspired by Pope Francis’ message. I think he’s the most powerful voice on this earth on how we have to address inequity all over the world and on the dangers of letting inequality grow. And it’s my fervent hope that at some point, working closely with the cardinal, we’ll have the opportunity to bring Pope Francis to new York City,” added Mr. de Blasio, who was born to a Catholic family but does not currently belong to any organized religion. Bill de Blasio and Cardinal Dolan after their meeting today.

But Mr. Dolan, who had once volunteered to bring Mr. de Blasio back into the Catholic fold if the mayor ever indicated an interest, said the two stuck largely to non-religious matters during their meeting.

“Well listen, if the mayor ever wanted to talk to me about his faith and religion, I’m a pastor first. But today we talked about more just the common visions. He was extraordinarily gracious in telling me about the deep Catholic roots of his own Italian family and about how he really feels that a lot of Catholic values and Catholic worldview that pervaded a lot of his thinking. But we didn’t get into the specifics of his faith,” he said, adding that, “If he ever wants to, the door’s open.”

“The important thing was that he corrected that as soon it was brought to his attention,” he said.

Meanwhile, Mr. de Blasio raved about the “fantastic meeting,” which he said had covered a lot of ground.

“Just wanted to say that I’m really appreciative of the opportunity to spend as much time as I did with His Eminence. And it was a very energizing meeting. We have so much common ground, so much we want to work on together,” said the mayor of the pair, who at one point broke into Italian.

“We talked a lot about affordable housing. We talked a lot about Catholic charities and the work it does on behalf of children, on behalf of people in need. We talked about the need to help prisoners returning to society, a whole host of areas where we have common ground and where we can work together,” he added. “We think it’s crucial for the people we represent to have a personal bond and a close working relationship.”

For his part, Mr. Dolan seemed equally impressed with the mayor–minus his love for the Italian cookies the cardinal had provided his guest.

“I expressed to him my deep appreciation for the courtesy of his visit … I felt inspired about his commitment to a lot of the causes that we’re passionate about and I felt excited about working closely working with him,” he said after their visit. “My only beef is that he ate all the cookies.” 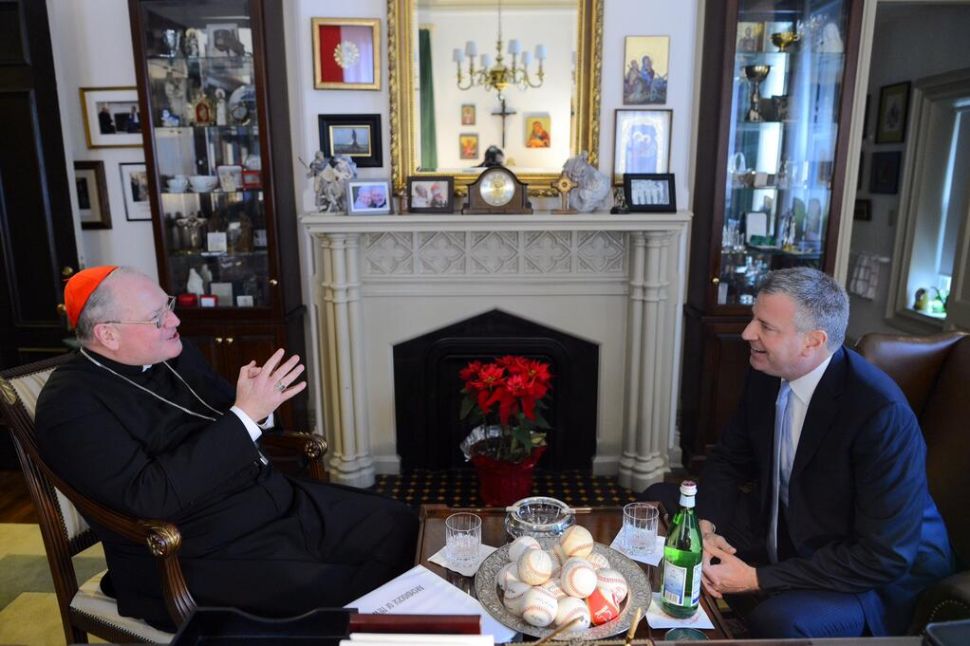