Over the coming years, these men and women will serve as Mr. de Blasio’s voice and help to shape his message as he puts his mark on the city.

Here is who’s who: Leading the team as press secretary will be Phil Walzak, who served as a senior communications adviser on Mr. de Blasio’s campaign and will now manage the press shop’s operations. Often seen but rarely heard during the campaign trail, Mr. Walzak’s role will differ from his recent predecessors, with more focus on strategy and less on being the day-to-day mouthpiece for the mayor.

“You’ve seen Phil along the way standing by my side, often whispering insightful comments into my ear. He’s been a fixture in our effort, and I’m so proud that he will be my press secretary here at City Hall,” said Mr. de Blasio at a press conference at City Hall rolling out Mr. Walzak and the rest of his team.

A native of Wisconsin, Mr. Walzak, 37,  previously worked as a spokesman for Tammy Baldwin, the first openly LGBT member of the U.S. Senate, communications director for President Barack Obama’s 2008 campaign in the Badger State and director of strategic communications at the U.S. Department of Homeland Security.

“He really has been through the wars. And even though he’s known for his bubbly, effervescent personality, he is a hardened, grizzled veteran of many difficult struggles,” Mr. de Blasio teased.

Fun fact: A die-hard Green Bay Packers fan, Mr. de Blasio joked that he had to stop Mr. Walzak from repping his team at the presser. “Phil did want to wear his native ethnic garb of the cheese-head, but I told him it would be inappropriate for this press conference,” quipped Mr. de Blasio. Mr. Walzak’s birthday also happened to fall on Election Day.

Marti Adams, 29, will serve as chief spokesperson for Mayor de Blasio, speaking frequently on his behalf. The only new face of the seven-member bunch, Ms. Adams spent six years working for President Obama—both for his campaigns and in his administration, working her way up in his 2008 campaign from press assistant in New Hampshire to deputy press secretary for first lady Michelle Obama.

In 2012, she was charged with managing all of the president’s campaign events and clearly impressed Mr. de Blasio, who is often reluctant to reach outside his inner circle for important posts.

“I do not lightly bring new talent into such a charged and challenging atmosphere. They have to prove to me that they’ve walked through fire before. And I can safely say that Marti Adams has met that test,” he said at the press conference, noting that Ms. Adams “convinced me quickly that she belongs here with us.

“Her career has been nothing short of meteoric,” he added.

Fun fact: Ms. Adams was one of the original 19 “Day One” staffers at the United States Treasury department during the early days of the Obama administration, coping with the fallout of the financial crisis.

Rebecca Kirszner Katz is another familiar face in de Blasio world, going back to his run for public advocate. Ms. Kirszner Katz, who played a key behind-the-scenes role in the campaign, will serve as special adviser to the mayor, overseeing longterm media projects and planning. She previously worked as Senate Majority Leader Harry Reid’s communications director, ran the Senate’s “Communications War Room” and is the proud mom of two kids.

“She brings a special understanding of the challenges of families and always infuses that into all we do,”  said Mr. de Blasio in his introduction. “She has a conscience and a heart that informs so much of what we do,” he said, adding that sometimes he considers her “a fifth member of our immediate family.”

Fun fact: One of Ms. Kirszner Katz’s sons also had a starring role in the de Blasio campaign, in the form of this meme. And it turns out the pair have a long history together. Back in his early days at City Hall working in the Dinkins administration, Ms. Banks was Mr. de Blasio’s very first assistant almost 22 years ago.

“A wise head even at that young moment in her life,” Mr. de Blasio said. “Angela and I went through the fire together. Those were some tough years, tough times. But she stayed cool. She always had something wise and insightful to say. And she had a great way with people.”

Fun fact: Ms. Banks is a former rap artist, who used to go by the name Madame Star and once even graced the cover of Billboard magazine. “One day, I’ve devoted my administration to getting Angela to rap again on the public stage,” Mr. de Blasio joked.

Maibe Ponet, who will serve as deputy press secretary, is another returning member of the de Blasio team. She served as press secretary to Mr. de Blasio during his first year as public advocate, before leaving to become the opinion page editor for the Spanish-language El Diario La Prensa, where she also wrote about Mr. de Blasio’s campaign.

“Sitting across from her at the editorial board meetings at El Diario—even though she was my former employee and friend—she was tough, she was insightful, and though her intentions were good, she grilled me just as hard as anyone,” he claimed.

Ms. Ponet, 39, will focus on the Spanish-language, community and ethnic media, she said.

Fun fact: During the first weeks of his tenure as public advocate, Mr. de Blasio’s office had no budget and a staff so small they could fit into one of the cramped booths of the Purity Diner, he joked today. “She got us through, no matter what we were up against,” Mr. de Blasio said. He and Mr. de Blasio apparently bonded after the 2010 post-Christmas blizzard, when they traveled the city together assessing damage. “Wiley had very ambitious ideas of where we could go on foot to visit the different parts of New York City,” quipped Mr. de Blasio.

For his part, Mr. Norvell said he had been a fan of the current mayor since watching him years ago on the steps of City Hall railing against the overturning of term limits. “I drank the Kool-Aid then. I never really stopped.”

Fun fact: A biking advocate, Mr. Norvell even biked to work today, one of the most frigid in recent history.

Another aide on the campaign and Obama for America alum, Mahen Gunaratna, 27, will serve as director of research and media analysis in the mayor’s office.

Fun fact: Mr. Gunaratna was born in Manhattan, but his parents immigrated from Sri Lanka by way of Jamaica, Mr. de Blasio said. 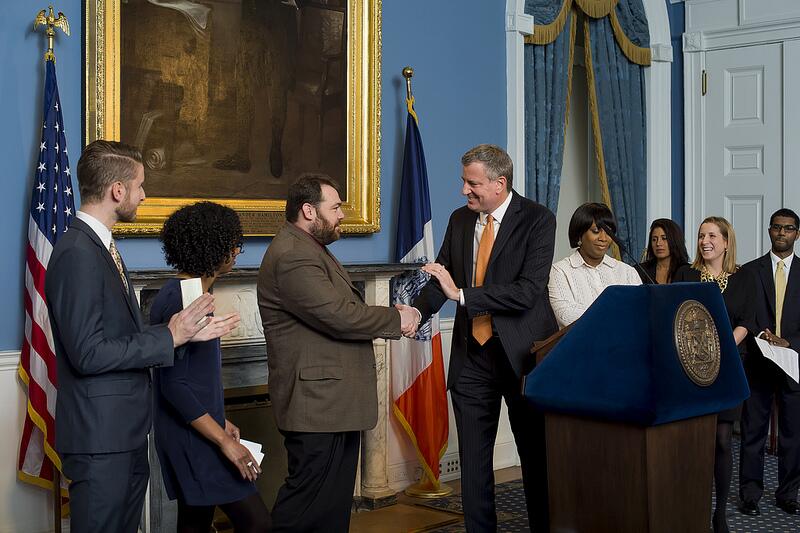