Way back in the more innocent days of 2009, when blogs like Gawker still obsessed over the foibles of media world folk, New York Times freelancer Mike Albo became an Internet sensation when he went on a press junket to Jamaica and was subsequently cut from the paper of record, where he had a regular gig as as the Critical Shopper columnist.

The Times initially agreed that since Mr. Albo went on the brand-sponsored jaunt as an individual and not as an employee of the Times, he hadn’t violated its ethics policy. But the paper reversed its stance after blogs called for Mr. Albo’s head and stricter accountability for freelancers. In a quick 180, Mr. Albo was then held up by the press that had pilloried him as an example of the dubious status of the freelancer.

In 2011, Mr. Albo recounted the experience in a lightly fictionalized Kindle Single, appropriately titled The Junket. Earlier this year, the tale made it onto the stage as a one-man play at Dixon Place, a Lower East Side performance space with a bar. The play was extended into the new year and there are performances scheduled for the next two Saturday nights.

Last Friday,  many journalists came to view what is a cautionary, albeit entertaining, tale. Among the writers in attendance were one-time Gawker staffer Emily Gould and novelist (and one half of an Observer power couple) Bennett Madison. Staffers from the Daily News, NBC News, Al Jazeera America and other outlets filled the audience.

Some had read the Kindle version, while others vaguely remembered the scandal from back in the day.

“When I first started, I was like, I’ll just cut it down, and magic will happen,” Mr. Albo told Off the Record, about the process of adapting the longform story for the stage. “The Kindle Single has this bitterness to it, but we had to go back and recreate it so it felt like I was experiencing it. So there’s a lot of present tense.”

Also, Mr. Albo said, he found that some jokes didn’t translate to the spoken word, like mock headlines for Times travel stories.

Although certain aspects of the story had to be simplified and adapted for the stage, the details are all there, slightly fictionalized. Thrillist, the company that ran the junket, is disguised as Dudester. The Times is called the Tomes, Gawker is Jabber, the journalist who uncovered the story is called John Jerkovici, and the airline that transported the Junketeers is called tripBlue. A projector helpfully displayed logos of the fictionalized names of brands designed to look like their real-life counterparts, just in case the audience had trouble making the connections on their own.

To judge from the reaction to the monologue, the story still resonates with reporters.

There was a lot of uncomfortable shifting in seats during the hour-long performance as Mr. Albo detailed the uneasy relationship between journalists and swag that fuels the transactional economy.

“Every journalist should be required to see this,” a reporter told OTR afterwards.

“I love hearing when journalists are like, ‘This is something we should listen to and take note of,’” Mr. Albo said. “And I know some people are like, ‘That depressed the fuck out of me.’”

As if to counteract the sobering effects of the story, the Friday crowd gathered at the nonprofit event space’s upstairs bar after the show. Or maybe reporters just like to drink.

Even the bartender was a journalist. It was that kind of night.

Small groups discussed whether the Times  treated Mr. Albo fairly, although the conversation turned from to reporters’ own experiences with ethically questionable  goods when the author/performer took a stool at the bar to greet friends and well-wishers.

The consensus was that the Times had dealt Mr. Albo a rough hand. And that Mr. Albo was a skilled performer.

“We worked so hard on it that I know it’s good—not to sound like an asshole,” Mr. Albo. “The irony is that to move forward we need to get a Times review,” explaining that a mention by the paper of record still goes a long way toward ensuring a play’s success.

But so far, the Times (make that the Tomes) hasn’t bit.

“I find it interesting that the Times hasn’t come,” Mr. Albo said. “I think it would be a challenge in a fun way to figure out how to write about it within the Times.” 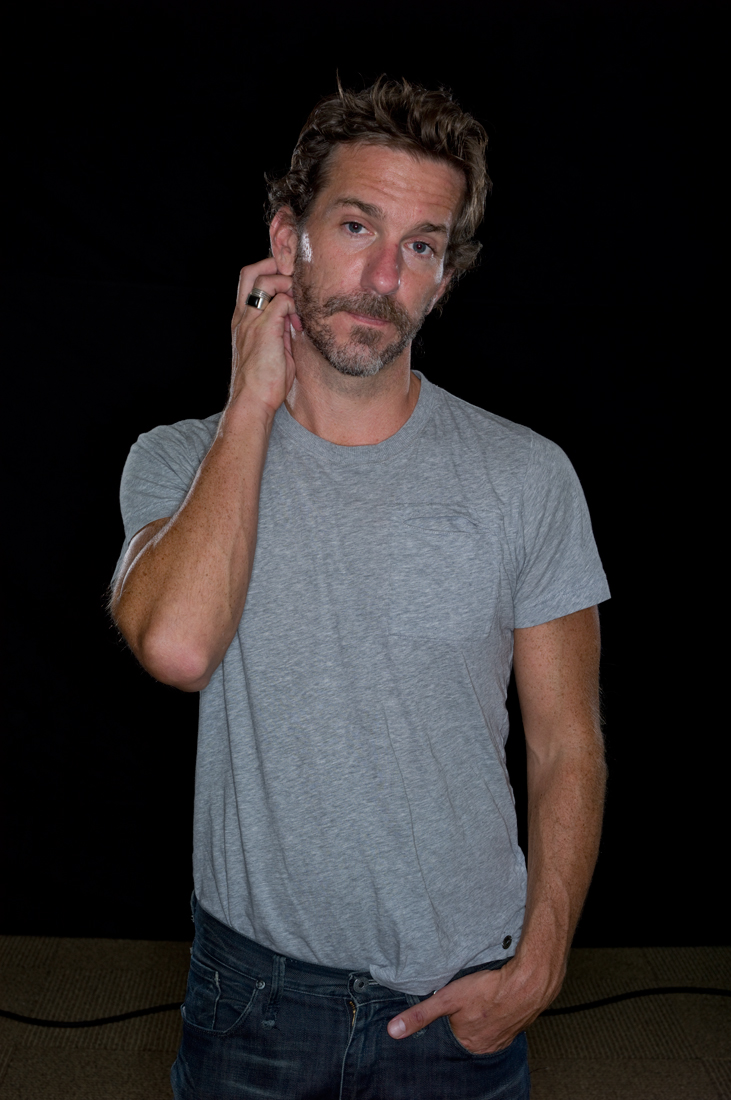 Filed Under: Media, Off the Record, Mike Albo