Mr. Castanos smiling for the camera in 3D Heights

Something really cool is happening in Washington Heights—like, a thousand times cooler than that random MTV reality show from last year.

Military veteran Jerry Castanos—who spent eight years in Afghanistan and eleven years, total, overseas—recently opened a 3D printing store in the Washington Heights neighborhood of Upper Manhattan, where he grew up. The store, aptly named 3D Heights, is located on Broadway between 172nd and 173rd Streets, and is run by military veterans and local community members.

Mr. Castanos started reading about 3D printing on his computer one night, and said it totally appealed to his “geek mode.”

“It’s like in Star Trek, [where] they have a replicator,” he told Betabeat, adding, more seriously, “Looking at the market research and studying the industry, there’s a huge need for it economically, physically.”

3D Heights, which calls itself the “first all in one 3D printer retail mega store in New York,” is multi-purposed: customers can bring in designs they’d like to have printed, buy their own 3D printers and various related products and even take classes on 3D printing. Since officially opening on Dec. 21, Mr. Castanos said they’ve been less focused on turning a profit, and more interested in educating the public on what 3D printing actually is.

“Some people think it’s regular printing,” Mr. Castanos said, when we asked him about the store’s typical clientele. “We get a chance to introduce them to the technology. We show them the machine can make tools, mini replicas of their kids, architectural buildings, cellphone cases. We don’t push them to buy anything…but they can start thinking about that application of the technology in their everyday life.”

There are also more experienced customers who come from nearby Columbia Presbyterian Hospital and Yeshiva University.

If you’ve never commissioned a mini replica of your child at a 3D printing store (you’re totally missing out, bro), Mr. Castanos explained there are a variety of free computer programs, like 123D, that let you create your own 3D printing blueprints by scanning a bunch of photos. Customers can then bring those blueprints into the store.

Of course, Mr. Castanos is aware of the potential risks associated with opening 3D printing to the public.

“Our policy is not to print out any weapons of any kind,” he said. “To date no one has ask for such items to be printed.”

The store also has a rule against printing any copyrighted or trademarked products, so don’t think you’ll be able to impress all your friends with your sweet new “Xbox.”

Basically you should just be like Mr. Castanos, and 3D print yourself: 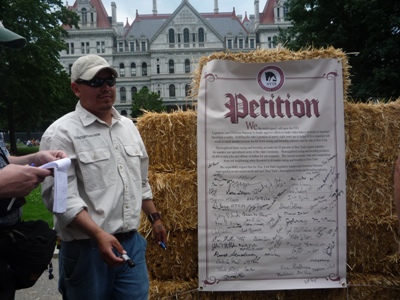