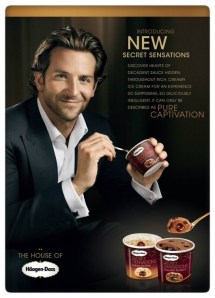 Bradley Cooper, who stars in ‘American Hustle’ and appears in advertisements for Häagen-Dazs®. (Courtesy Häagen-Dazs®)

Director Peter Greenaway gives details about his exhibition “The Golden Age of the Russian Avant-Garde,” which opens at the Moscow Museum and Exhibition Association Manege in April. [The Art Newspaper]

The British Library has released 1 million images into the public domain. [Hyperallergic]

What is a collector? [Ed Winkleman]

Poet Philip Levine offers a beautiful remembrance of a day in 1948 he spent at the Detroit Institute of Arts. [Artforum]

In case you missed it: Kevin McGarry spoke with Korakrit Arunanondchai, who will have a show at MoMA PS1 in the spring. [T: The New York Times Style Magazine]