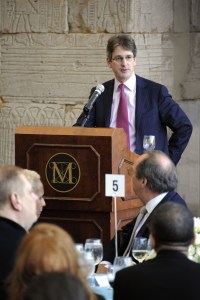 “The Met’s Director Went to Davos to Say Museums Need to Talk Like Businessmen.” [The New Republic]

Ralph Rugoff, the director of London’s Hayward Gallery, has been named the curator of the 2015 Lyon Biennale. [Il Sole 24 Ore]

Colin Gleadell on the hot art sales in London. [The Daily Telegraph]

Mana Contemporary, the giant art storage/artist studio complex in New Jersey is expanding on the home front as well as adding branches in Los Angeles and London. [The Art Newspaper]

The Chris Christie scandal finally comes to our beat, hooray! “In her first year in office, Lt. Gov. Kim Guadagno opened a frontal attack on an unlikely target, the New Jersey State Council on the Arts.” [NYT]