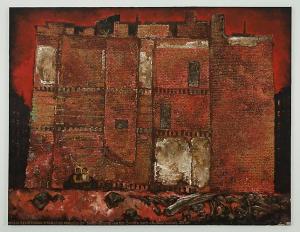 On the extremely excellent and still-underrated artist Martin Wong, and his support of graffiti artists. [NYT]

“Tracey Emin has claimed education secretary Michael Gove is ‘scared’ of her, in the long-running row about arts education.” [Telegraph]

What do Andy Warhol, William Burroughs and David Lynch have in common? They all loved to take tons of photographs. [The Independent]

“A collection of Egyptian jewellery worth £40,000 has been stolen from the New Walk Museum and Art Gallery in Leicester. According to the newspaper the Leicester Mercury, the items were stolen in May 2012, but the theft was not revealed to the public until a recent Freedom of Information request. The thieves, who apparently broke a latch on a display case to gain access to the artefacts, have so far evaded arrest and none of the pieces have been recovered.” [The Art Newspaper]

“In the next few days ‘The Monuments Men,’ directed by George Clooney and boasting an all-star cast, will be previewed in staid and upper-crust locations such as the National Gallery of Art and Harvard’s Kennedy School of Government…” [WSJ]

BREAKING: “The art world and the world of professional American football rarely overlap, nor will they when the Pepsi Corporation takes over New York’s Bryant Park on 29 January to 1 February, ostensibly in celebration of Super Bowl XLVIII.” [The Art Newspaper]