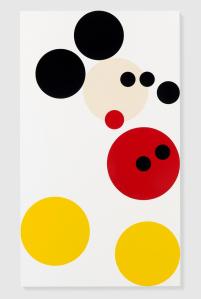 Damien Hirst has made a portrait of Mickey Mouse that will be sold for charity. [The Independent]

Chelsea’s Empire Diner is back. [NYT]

Dustin Yellin made a sculptural tribute to Diane von Furstenberg’s iconic wrap dress, using 4,800 pounds of glass, for an exhibition in the designer’s honor in L.A., which will also feature new commissioned work by Barbara Kruger and portraits of Ms. von Furstenberg by Andy Warhol, Chuck Close and others. [W Magazine]

In case you missed it, that giant yellow duck by Florentijn Hofman exploded. Again. [Telegraph]

The first director of London’s National Gallery once had to stand before Parliament and defend his decision to buy a Veronese. [The Guardian]

What’s Simon Fujiwara up to these days? [The Art Newspaper]

Momofuku Milk Bar in Williamsburg has a special “Cinnamon and Lesbians” flavor, which is tied to Stephen Malkmus’ new album. [Grubstreet]