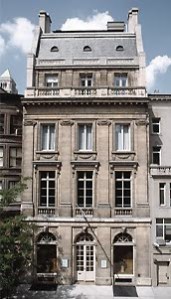 “The Wildenstein family of international art dealers is selling its East 64th Street headquarters to the government of Qatar, which plans to open a New York consulate there.” [WSJ]

Is the DIA safe? “The Detroit Institute of Arts, whose world-class collection has been targeted as a potential source of cash to help dig Detroit out of federal bankruptcy, announced Wednesday that it would raise $100 million to help save itself, joining a group of private foundations that have already pledged $370 million toward the effort.” [NYT]

Liz Diller defends the decision to take down the Folk Art Museum at a public forum. [NYT]

Speaking of controversial architects, here is a nice history of the construction of the Seagram Building. [LRB]

“Last November, the Los Angeles County Museum of Art (Lacma) accepted the donation of Max Beckmann’s 1944 painting Bar, Braun (bar, brown). The day before, Focusmagazine in Munich revealed that police had seized a cache of some 1,400 works of art from the son of the dealer Hildebrand Gurlitt, who made a fortune from his trade with and for the Nazi regime. The announcement on Lacma’s blog detailing the history of the work, which Beckmann painted while in exile in Amsterdam, left out a crucial fact–its buyer in September 1944 was the now-notorious Hildebrand Gurlitt.” [The Art Newspaper]

Someone in the art world does care about the Super Bowl! “Besides the Vince Lombardi Trophy, a sterling silver football on a pedestal, and immeasurable bragging rights, the [Denver Broncos and the Seattle Seahawks] will be playing for the artistic gratification of their respective citizens, thanks to a bet between the directors of the Seattle Art Museum and Denver Art Museum. [LAT]

Former MoMA curator Sabine Breitwieser has lined up a major long-term loan in her new position as director of the Museum der Moderne Salzburg. [Artforum]

And in the same digest article, we learn that “João Ribas has been named the new deputy director and senior curator at the Serralves Museum of Contemporary Art in Porto, Portugal.” [Artforum]