Confidential reports that Capital New York’s City Hall reporter Sally Goldenberg is dating DeBlasio’s press secretary. “Sally disclosed the situation to us early on and we set up protocols internally to ensure the objectivity of our coverage. Beyond that, she’s as tough a reporter as there is and a total pro,” Capital New York co-editor Josh Benson told the tabloid. (The Daily News)

Pope Francis really is the cool Pope: he landed the cover of Rolling Stone. (Rolling Stone)

Du Jour‘s Keith Pollock has been named editor in chief of Interview. (FishbowlNY) 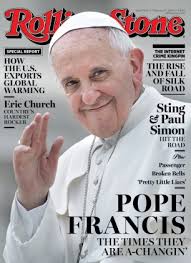