Headline of the Day: “After Keeping Company With Mobsters, Politician Now Speaks Their Language.”

Congressman Michael Grimm‘s Tuesday night threats against NY1 reporter Michael Scotto continued to dominate the news, with multiple outlets providing their own anecdotes to demonstrate a larger pattern of eruptions. As the New York Times reported, the blow-up “prompted revelations of other situations involving him that showed a hair-trigger temper” from other reporter and colleagues. “Incidents involving a butter knife, for instance, and a gun in a Queens club.”

In what the Daily New described as “a rare alliance with his predecessor,” Mayor Bill de Blasio is joining the gun-control group “founded and funded by former Mayor Michael Bloomberg,” Mayors Against Illegal Guns. “Mayor Bloomberg took on this fight when few others would, and today we are safer for it,” Mr. de Blasio said in a statement confirming the move this morning. “He built a national movement for commonsense gun control—one I am proud to join.”

Nassau District Attorney Kathleen Rice will run for Congress to fill the seat being vacated by retiring Rep. Carolyn McCarthy, Newsday reports today. Ms. Rice, who had been courted for weeks by members of the national Democratic party, told the paper that, if elected, she would continue Ms. McCarthy’s efforts to reduce gun violence, as well as focus on immigration reform and human sex trafficking.

City Council Speaker Melissa Mark-Viverito has begun a “charm offensive,” embarking on “a quiet but conspicuous campaign to appeal to her colleagues, and heal any lingering wounds from a long and fractious speaker campaign,” according to Capital New York. That includes setting up shop at 250 Broadway–across from City Hall–“to show members she’s available to them, and to make an implicit contrast with her predecessor, former speaker Christine Quinn.”

Former Congressman and failed mayoral candidate Anthony Weiner–himself no stranger to scandal–offered some unsolicited advice to Mr. Grimm. In an op-ed in the News, Mr. Weiner, describing himself as “someone who has had his own share of tension with local media about, ahem, different subject,” instructed that, “A congressman should not threaten to break, throw, ask to step outside or otherwise get physical” with a reporter. The incident could become “a larger teachable moment,” he suggested.

Despite vows of transparency,  Mr. de Blasio’s office remains without a records access officer to handle Freedom of Information Law requests from reporters and the public nearly a month after his inauguration, the Post reported. “One of the city’s biggest open-government advocates isn’t heeding his own advice — and he’s the mayor,” the paper wrote. Following inquiries, the office directed the paper to a temporary officer, “pending the hire of a permanent one.”

And last night, Rev. Michael Walrond made his run for Congressman Charlie Rangel‘s uptown seat official. After the event at MIST Harlem, Mr. Walrond spoke to reporters about his friendship with Mr. Rangel and allegations that he is a “spoiler” candidate, who will split the district’s shirking black vote, helping to propel State Senator Adriano Espaillat, who is expected to jump into the contest shortly. Watch the full exchange here, courtesy of New York True. 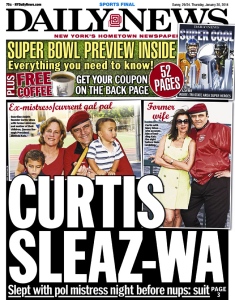