“It’s great for us,” U.S. Rep. Bill Pascrell (D-9) told PolitickerNJ on his way out of Hoboken Mayor Dawn Zimmer’s swearing-in ceremony. “If he wins a [Republican] Primary, that is great news for us.”

Comments like that have some Republican Party leaders squirming in CD3, half of which hugs the shore, where U.S. Rep. Jon Runyan (R-3) plans to retire after his current term in Congress.

But the fact that the Randolph politician doesn’t live in the district and is an unknown quantity in CD 3 has energized Lonegan, who in a Republican Primary match-up with MacArthur wouldn’t have to sweat the carpetbagger tag.

A fourth interested party, John Giordano, is in his late 30s but, according to one Republican source, looks 20.

NJTV’s Michael Aron yesterday tweeted that Lonegan’s buying a house in Ocean County, which the once and apparently future candidate promised he would do to PolitickerNJ.com.

“He looks like an idiot,” a Hudson Democratic Party operative told PolitickerNJ.com today at Stevens Institute as Zimmer raised her hand to take her second-term oath. “Imagine, running all over the state in search of a district that will have him. He ought to move to Alabama and run.”

So was Pascrell, who lauded Florio for his leadership as governor. The two Italian-American political allies go back to the early eighties.

As for Aimee Belgard, the Burlington County freeholder running for the CD 3 as a Democrat, Pascrell said he doesn’t know her but looks forward to helping her – especially if the GOP opts for Lonegan. 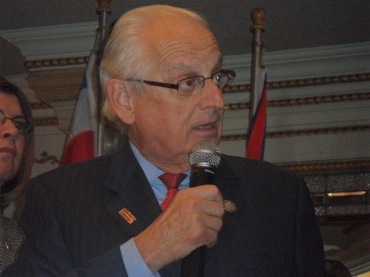