Mayor Bill de Blasio’s weapon of choice has been bagged, tagged, and hung on the wall of Goodfella’s Pizzeria in Staten Island where the murder of an innocent slice of NYC’s signature dish was committed.

The official NYPD evidence bag, which restaurant co-owner and retired NYPD sergeant Marc Cosentino got from a friend on the force, was originally hung on the wall for kicks.  After fork fans began stopping in to take photos and laugh giddily at the displayed silverware, Mr. Cosentino decided to auction off the infamous fork for a local Staten Island charity.  The date of the auction remains undecided.

The auction, of course, follows the newly elected mayor’s first scandal — eating his pizza with a fork and knife.  Mr. de Blasio pins his “odd” eating technique on his Italian ancestry and numerous trips to Italy, but media continues the mayor mocking.

“You should hide the silverware next time he comes in,” advised one customer. 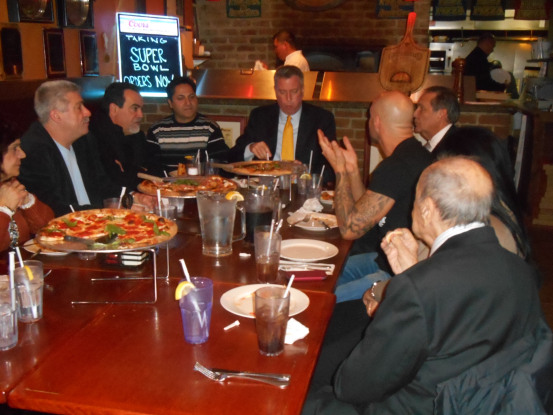