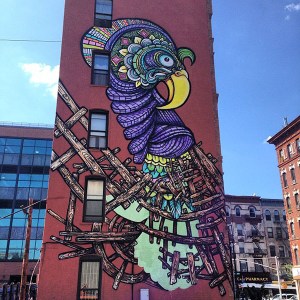 Here’s a sentence that now exists in the world, courtesy of the good folks at Courthouse News Service: “The losing candidate of the Democratic primary for a New York City Council seat claims in court that the three-term incumbent placed a Caribbean curse on her in the form of a public art project on the facade of her apartment.”

Gwen Goodwin, who was defeated by incumbent Melissa Mark-Viverito in the September primary elections for District 8 of New York City Council, filed suit against Ms. Mark-Viverito in New York County Supreme Court, alleging conspiracy, emotional distress, tortious interference, wrongful use of campaign funds, and larceny. According to Courthouse News, “A little more than a week before the primary, Mark-Viverito attended a ceremony unveiling a mural on the eastern wall of a building at 152 East 100th Street. Goodwin has lived at that address for decades.” (The mural was part of a project by El Museo del Barrio and San Juan’s El Repuesto.) Ms. Goodwin’s complaint states that “the mural depicted a decapitated and wooden-sword-stabbed bird of prey” that “disrupted” Ms. Goodwin’s efforts and “the resulting loss of energy from the campaign may even have affected the outcome of the Democratic Primary.” More here.