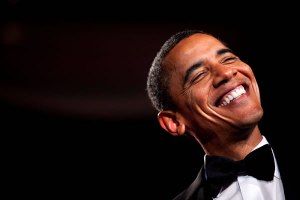 Probably not smiling about ‘Sculpture in the Expanded Field.’ (Courtesy blog.heritage.org)

During a stop in Waukesha, Wisc., on his post-State of the Union tour, President Barack Obama told an audience, “A lot of young people no longer see the trades and skilled manufacturing as a viable career, but I promise you, folks can make a lot more potentially with skilled manufacturing or the trades than they might with an art history degree[.]”

He continued, according to Politico, which had a reporter on site: “Nothing wrong with art history degree…I love art history. I don’t want to get a bunch of emails from everybody. I’m just saying, you can make a really good living and have a great career without getting a four-year college education, as long as you get the skills and training that you need.” Well, fair enough. (I offer this blog post in lieu of an e-mail, Mr. President!) I gotta say, though, as someone who invested several hundred thousand dollars in the Biggest Mistake of My Life, by which I mean a degree in English–wherein I once had the pleasure of writing an utterly incoherent paper about Dracula and Michel Foucault’s Madness and Civilization–art history doesn’t seem terribly impractical.

Still, not a bad excuse to take a moment this fine January afternoon and wonder what the hell you’re doing with your life.