Someone probably should have yelled, “Andy’s coming!”

The New York Post reported that a man outfitted as a character from “Toy Story” in Times Square took the name Woody a tad too literally and was arrested on sex charges last night.

The man beneath the mask, Jose Velasquez, is facing charges of “forcible touching” and sex abuse. According to The Post, the costumed cowboy could not keep the snake in his boot around “numerous girls.”

Mr. Velasquez was taken into custody by two plainclothes policemen, still fully dressed in Woody garb. There is still no word on what punishment the touchy toy will face if prosecuted.

Personally, we are speculating that he could be put away for infinity, possibly beyond.

In a prepared statement Tim Tompkins, President of the Times Square Alliance, said “This is the latest in a long series of disturbing incidents that reinforce our belief that these costume characters must be licensed and regulated.”

There was the fist-slinging Spider-Man that punched a woman in the face last February. Then Cookie Monster learned that “A” is for assault after he shoved a two-year old in May. And lest we forget Anti-Semitic Elmo back in 2012, who set the bar for mischievous mascots everywhere.

“We are looking forward to working with the new administration and City Council to come up with an equitable and effective regulatory solution,” Mr. Tompkins said.

We applaud the effort, Mr. Tompkins. But until that solution is found, we would suggest exercising discretion when choosing a Times Square photo op. 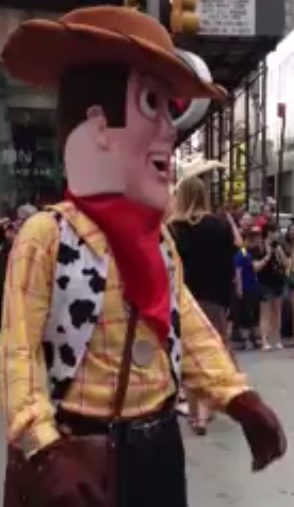