Rumama claims Wisniewski is withholding the information from Republican lawmakers.

“Chairman Wisniewski has publically stated that he has reviewed the subpoenaed documents at least twice,” he said. “He has yet to release this information to Republican committee members and has denied our request to examine the documents. The committee members, regardless of party affiliation, are entitled to study the information in order to properly prepare for Thursday’s hearing.”

Currently, a hearing is slated for Thursday in which lawmakers are expected to question a former Port Authority official, David Wildstein, on an email that reports suggest indicate orders to close lanes on the GWB came from outside the bi-state agency.

A Wisniewski spokesman did not immediately respond to a message for comment.

An Assembly Democratic spokesman said the documents will be provided to GOP members ahead of Thursday’s hearing, but declined to be more specific.

“The documents are still being reviewed in totality and the Republicans will certainly get them with enough time to review before Thursday’s hearing,” said Democratic spokesman Tom Hester. 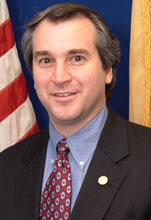