Yesterday I gushed about Something Wild, an album by Philadelphia-based Radiator Hospital, which has made it onto every 2013 Top Five list of every single person I have played it for, not exaggerating. Radiator Hospital has 10—10!—records up on Bandcamp from the past three years, most of which are pay-what-you-want, so there’s no excuse not to get them all. A quick Google search netted a handful of singles (all sold out, sorry) and compilation tracks.

Like I said, there’s a lot of irresistibly guileless hook-soaked pop in Sam Cook-Parrott’s cannon. But he also has a sneaky softer side. “Big Cloud” and “Down Again” are almost folky, like sing-songy rounds. He’s got a surprisingly impressive vibrato on “Cryin Kind,” which is like a cross between an Irish sea shanty and a crooning torch song floating over a wash of monotone harmonies, and reminds me a lot of the short-lived Brian McTear project The Mariner Nine’s cover of “Man You Don’t Meet Everyday” . “Lose Sight of You,” about seeing somebody across a room that you don’t necessarily want to take home (yet) but you can’t stop looking at, made me go back and listen to some of the best early Sebadoh songs. I can totally picture crowded live gigs where the audience drowns him out singing the “Ooh Ooh Ooh” chorus of “Hearts Apart” from 2011’s Nothing In My Eyes .

Linked above is an adorable homemade video for “A Game of You,” off of 2012’s Some Distant Moon , a deceptively simple song about the conflict between longing and sensibility, sung by a guest vocalist only credited as “Amber.” Meanwhile, the chorus of “Cut Your Bangs” (from Mall of America) is the beat circling my brain at this moment. He sings, “You say you’ll cut your bangs / I’m callin’ your bluff / Yeah when you lie to me / It’s in the small stuff,” and then describes rotting flesh, maggots at home in the heart, “teeth gnashing louder than your monologue.” When a thing falls apart, the seemingly inconsequential things fail first, and pretty soon you’re cringing because, well, it all just gets gross. As with much of Cook-Parrott’s songwriting, the chassis is chippy and lilting, but ouch, check under the hood.

Also on Mall of America , the second RadHos album that came out in 2013, he does a ridiculously faithful cover of “Carey,” a very catchy but complex and nearly impossible-to-sing Joni Mitchell song, note for note, every bizarre harmony replicated, but recorded all hissy and lo-fi. Even when Joni does it, the background vocals sound like a chorus of mice. In Cook-Parrott’s hands, it’s like wee baby cartoon mice, and the guy can’t hardly hit any of the fence-jumping high notes, but he’s so gutsy, he just pours it out anyway, and it’s absolutely infectious. At first glance, it seems like an odd choice for some punk in his early 20s to cover, but then again, from what I’ve read on Cook-Parrot’s blog and in interviews, he’s a die-hard music collector. His Facebook page is a consistent stream of current bands he’s into, and on his albums he covers songs written by his performing peers, making him like a one-man rabbit hole into the modern DIY scene.

In the recap of his Midwest Megabus tour (yes, he tours via Megabus, pretty crushworthy in and of itself), he effuses about scoring records along the way by Emmitt Rhodes, Papas Fritas, the Flamin’ Groovies, Todd Rundgren, Bobby Sutliff, Velocity Girl, and so on. OK, sorry, I guess calling somebody precocious, which is what bringing up the fact that he’s so young essentially does, is a little condescending, but I can’t help being impressed that at barely drinking-age, Cook-Parrott has such a keen grip on the emotional complexities of how relationships evolve and disintegrate and are then reborn elsewhere. And he can write a melody worthy of anyone from Guided by Voices to Elvis Costello and back. And it seems like his record collection could rival the library behind that Rob Sheffield memoir “Love is a Mix-Tape.” Seriously, I cannot wait to hear what he comes up with next.

Radiator Hospital opens for Potty Mouth at Glasslands in Brooklyn this Monday January 6 and in New Haven at Cafe Nine the next night. 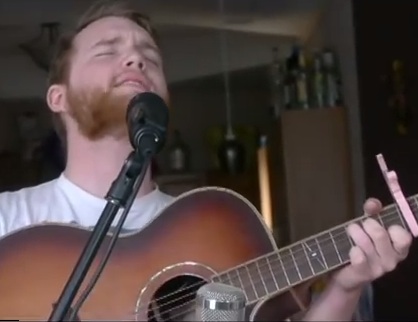