Why does everything have to suck so much?

That was the most articulate reaction I could muster for a good 24 hours after I found out 285 Kent—Williamsburg’s flashiest semi-legal venue and a place I’ve spent many memorable (and some more dimly remembered, but no less fun) nights—was closing up shop. In the rational part of my brain, I’d seen it coming since the place opened; I’ve lived in post-Giuliani New York long enough to know this is simply the way things go around here, and that something else will take its place. But in the reptilian, emo-teen part of my brain, the part that knows only love and betrayal, I wanted to throw myself to the ground and weep bitterly. Nothing gold can stay!

The troll-ish contrarians of Twitter can go back and forth about whether or not this matters in the grand scheme of things, but I don’t think anyone would disagree that it’s a sad day for the various intersecting groups of people who worked, played, got kicked in the face, drank too much shitty beer, did a bunch of Molly (or whatever is being passed off as Molly these days), got fingerblasted, discovered new music, peed in buckets, and fell in love within those concrete walls. I’ve got plenty of other places to hang out with my friends, but there was a certain type of cross-pollination—whereby a 30-year-old death rocker might find herself engrossed in deep conversation with a 17-year-old raver chick at 4 a.m.—that’s going to be tough to replicate.

I’ve been working all week to gather remembrances from the people who made the place what it was (coming soon!); but for now, here are a few of my own favorite memories.

1. Seeing Diiv for the first time (video above)

Of all the bands to come out of the North Brooklyn rock scene in the past few years, Diiv has been one of the fastest rising. Cynics attribute this to the semi-famous girlfriend and Kurt Cobain fetish of frontman Z. Cole Smith, but the first time I saw them, none of this stuff had really become common knowledge. Knowing Cole played guitar in Beach Fossils, I was ready for them to be a competently reverb-y group of shoegazers; I was not ready for them to kill the fuck out of it like they did. The music had a dark urgency you don’t see every day, and when Cole sang or screamed into the mic, he meant it. People moshed! I did an awkward dance with the bat-sleeves of my dress! When their record came out, I bought it.

I’m not saying there are no extramusical factors at play, but plenty of bands garner buzz primarily because they’re good and people like them. Diiv is one. I’d also like to take a moment to give the biggest possible side-eye to any and all adult humans who responded with childlike glee to the news that Cole has a heroin problem. Who raised you?

This show was so much fun! Despite, not because, I thought I might faint for most of it. Elias Ronnenfelt of Iceage got his face cut up something awful, but he just kept screaming and crowdsurfing like only a crazy young’un with a naive interest in fascism can. Damian Abraham looked like he was about to die the whole time, but brought the rawk anyhow. At least one of my friends went home early because she was so uncomfortable, but I found a nice, tall speaker to stand on and wouldn’t give up my spot for anything.

The moment I heard Chelsea Wolfe’s dark, tough-to-classify doom-folk music, I became a fan for life. It was dark, weird, emotional, dramatic, and ominous—all without veering into cheesy territory. What more could a semi-grown-up Goth kid want?

I’ve never seen someone whip a crowd into a frenzy—then calm them down just as quickly—the way Dan Deacon did that sweltering night. At one point, a guy in the audience started freaking out because there were too many people around him, and Dan took him backstage and talked him down, then led us all in an exorcism of bad mojo. Then he had us all form a big circle for people to dance in. It was beautiful.

5. The recent Shannon and the Clams show

Specifically: watching my friend chug a Bud Lite Lime-a-Rita he’d snuck in, then run to the bathroom to puke the vile beverage up, then run right back to the stage to crowd surf. Truly inspiring.

I can’t say I was 100% on board with everything that got booked there, but that’s okay. All-ages clubs are for real kids too, not just “kids” who are 28 like me. So when #seapunk became a thing on the Internet, 285 wasted no time in bringing it to New York, and I wasted no time in going to see what people younger and more terrifying than me were doing. It was especially fun a few days later when I got a text from an unknown number chiding me for making fun. SEAPUNKS KNOW ALL.

7. The time I went to every show there for a month and it almost ruined my life.

8. The time Kitty (née Pryde) and Chippy Nonstop got mad at me and it was awkward in the moment but funny in retrospect.

9. The time club manager/jill-of-all-trades Kaitlin Brown ran an extension cord out the door, across the street, and up the block in an attempt to rescue my bike from the pole it was locked to. (My key had finally broken.)

10. The time Quintron and Miss Pussycat turned the whole place into a psychedelic swamp populated by vampire puppets and sentient spaceships.

11. The time my friend Jodie caused a power outage at the seapunk show because she peed all over the wires backstage. “Everyone thought it was the notorious and enigmatic air conditioning” she said, a twinkle in her eye.

285 Kent’s final shows are happening this weekend. They are pretty much sold out, but a limited number of tickets will be available at the door on a first come, first served basis.

Read our story in this week’s paper for a comprehensive look at all the NYC venues that have closed in the past decade. 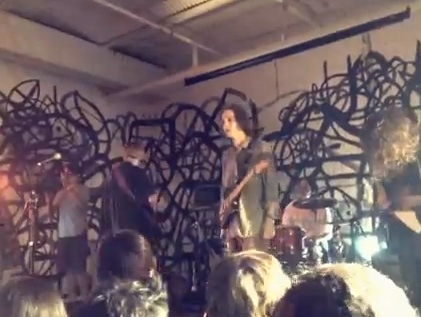