The Transom was recently kicked out of a Russian souvenirs shop—not once, but twice. Although we almost never went in in the first place. For more than a year, the ancient, darkened storefront on East 14th Street—simply called “Russian Souvenirs”—terrified and mesmerized us in equal parts. Stolen glances through the cracked, dusty window revealed Soviet military caps, rows of eerie nesting dolls, mismatched animal figurines, hanging textiles and—bizarrely—a rack of lens-less glasses.

A solid, recessed door was the only point of entry, and we never had the courage to open it. We weren’t alone. Poking around online, we discovered a veritable support group of individuals who feared the Soviet souvenir emporium as much as we did.

“I ventured in there once, but the owner was sprawled out asleep on a lounge chair, semi-blocking the doorway,” a commenter wrote, “I leaned over him, trying to get a look inside, but his angry snores scared me…been afraid to go back.”

Overcoming our fears of being silently murdered and buried beneath a pile of borscht spoons, the Transom decided it was time to make our grand entrance.

First, we popped into the neighboring Ace Moving Store in search of advice on how best to interact with the Russian shopkeeper. “Just go in and talk to him,” a woman behind the counter instructed us. “Talk softly. He’s an old man.”

We pushed the door open and stepped tentatively into the heavy, musty silence. We instantly felt swallowed by precarious piles of Russian artifacts: framed photographs of austere-looking Russian families; Eastern Orthodox religious icons; pins from the 1980 Tallinn Olympics; more nesting dolls. So many nesting dolls. A narrow pathway had been negotiated through the clutter, leaving room for a maximum of three to four shoppers at any given time.

At the end of the pathway, perched quietly like a watchful bird, sat the owner. Reportedly named Alex Bogatyr, he spoke little English, and didn’t look particularly thrilled to have us in his shop. When he found out we were there to report a story—and not to buy nesting dolls—he told us to leave and to come back at Easter. (Why Easter? He didn’t say.)

Just then, a man and woman entered the shop behind us. The man inquired about an item in the window, and Mr. Bogatyr pushed past us to lead the man outside. We followed them. When their conversation was over, we attempted to follow Mr. Bogatyr back into the shop, but the door swung shut in our face.

The next day, we decided to try our luck again. At 2 p.m., we stepped through the door, determined to last longer than three minutes this time around.

It was hard to tell whether Mr. Bogatyr recognized us from the day before, or if smiling just isn’t really his thing. We searched for a conversation topic.

“So, uh, are these really from the 1980 Tallinn Olympics?” we said, gesturing at the expansive wall of lapel pins to our left.

“Did you bring this stuff back from Russia?” we asked.

“You want to talk, I have work to do,” Mr. Bogatyr said matter-of-factly, before shooing us out of his store—again. We passed then through a nervous-looking group of people pooled outside the store’s front door, and gave them a good-luck eyebrow raise. 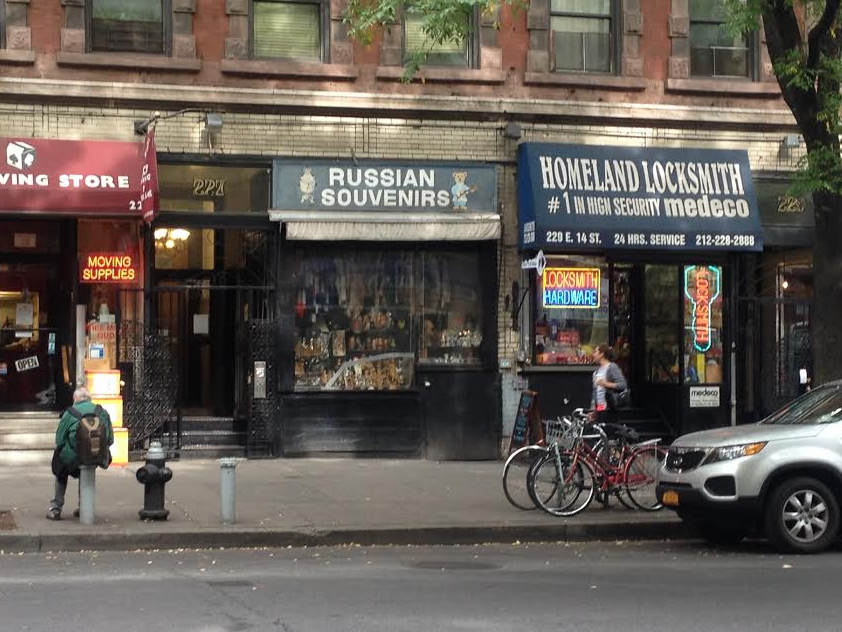