NEWARK – Central Ward councilman and Newark mayoral candidate Darrin Sharif opened his campaign headquarters on South Orange Avenue on Saturday, declaring his candidacy to be neither quixotic nor a compromise.

“I’m running for mayor because I’m the most qualified person to move our city forward, plain and simple,” said Sharif to a crowd of more than 50 supporters in the city’s Vailsburg section. “You don’t see the big political bosses and developers in this room – all the people who make the deals behind the scenes in the dimly-lit restaurants where you and I are never invited. I have all the respect in the world for my opponents, but when you hold my resume of accomplishment and achievement next to theirs, it’s not even close.”

Sharif, 52, who scored an upset victory in 2010 when he defeated incumbent Charles Bell, backed by then-Mayor Cory Booker, by 11 votes in a runoff, pointed to the Central Ward as a place where he believes Newark’s fortunes have risen in recent years.

“Whether it’s the Prudential office towers, Teachers Village or the Springfield Avenue Marketplace, all of the economic development that has occurred [in Newark] in the last four years has happened in my ward under my watch,” Sharif said.

Sharif parachuted into Brick City’s mayoral race in August, joining fellow councilmen Ras Baraka and Anibal Ramos, Jr. as well as former state Assistant Attorney General Shavar Jeffries. The other three Newark mayoral candidates are considerably ahead of Sharif in terms of fundraising, but he defended his entry into the race in no uncertain terms.

Perhaps a greater question in the 2014 mayoral race is about why Carl Sharif, Councilman Sharif’s father and the strategic mastermind behind Cory Booker’s 2002 and 2006 mayoral campaigns, is working as senior advisor to the Jeffries campaign.

Councilman Sharif’s answer centered on the vagaries of local politics as well as family lessons learned.

“Long before I declared my candidacy, my father was a part of a larger political group that evaluated each one of the candidates, but I was nowhere on the radar,” Sharif told PolitickerNJ.com. “Once I became a candidate, it would have been improper for him to try to rig the process. I respect that. But I’ve learned a lot sitting across from my father about political knowledge from the organizational standpoint. I’ve been through the drill time and time again. Over the last 25 years, my father has elected easily 80 percent of the people who are in office. And who has been at his knee but me.”

The relationships between fathers and sons seem to be a consistent leitmotif in local politics: New York City Mayor Bill de Blasio’s come-from-behind victory in Gotham’s last mayoral race was in large part because of the appearance of his son Dante in a famed campaign commercial.

But for Sharif’s corps of true believers, their candidate doesn’t need a Dante.

“Everybody thinks we’re at the bottom, but we’re at the top. They just don’t know it yet,” said North Ward resident Tracy Rogers, 48. “The other candidates are screaming at each other, but they’re not talking about the issues. We have to think about where Newark needs to be globally, and Darrin does that.” 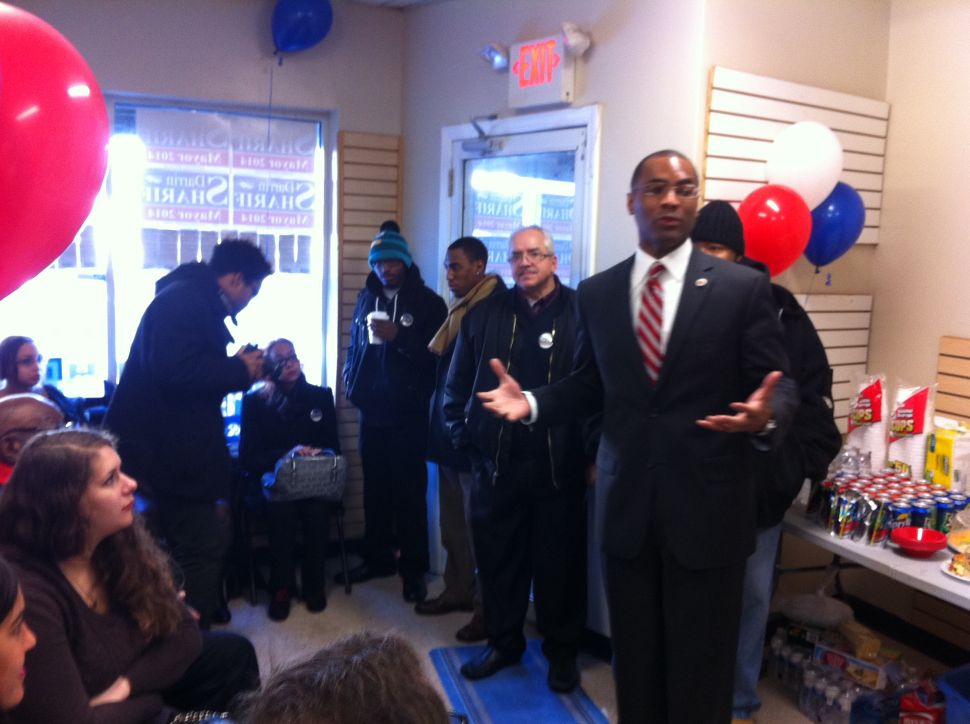