OK Harris, the independently minded Soho gallery started by Ivan Karp that specialized in photorealist art and was almost certainly the only art dealership in history to include a cigar shop, will close after almost a half century in business. (OK Cigars will continue at least for a while.) The gallery (whose namesake was fictional: “a tough, American name that sounded like that of a riverboat gambler,” Karp once explained) made the announcement in an email, saying that its final public day will be April 19.

Karp, who died in 2012 at 86, founded the gallery on West Broadway in 1969 (long before galleries settled in the neighborhood en masse), after working as a director for Leo Castelli. His papers are stored at the Smithsonian’s Archives of American Art, which will also receive the gallery’s archives. “Ivan deliberated the eventual closing of the gallery when he could no longer be its hub,” the gallery wrote. “He left us with clear guidelines for its duration, to which we adhere in closing, recognizing Ivan’s and our collaboration with each of you during the last 45 grand years.”

The full letter follows below:

After 45 years, OK Harris will be closing. We will proudly exhibit the works of the exceptional artists on our schedule through April 19th. This e-mail is to thank you and to congratulate our artists, collectors, dealers, friends, on 45 years of successful collaboration. Ivan C. Karp, the gallery’s progenitor and prime mover, its heart and soul, was the proud steward and loving parent of this institution. OK Harris has been an accomplishment worthy of acclaim and celebration and has historical resonance.

Every one of us contributed to Ivan’s vision and participated in the life and character of OK Harris. The gallery hasn’t merely been a place to showcase the talents of artists or an establishment for the sale of works of art to an admiring public, it has been an institution where people of uncommon vision and love of creative enterprise could come together and be uplifted by the variety and resounding quality of Ivan’s generous vision.

All things pass, and passages are bittersweet. There is joy in having participated in a thing worth doing and in the knowledge that it was done well, and melancholy in its ending. OK Harris was the first gallery on West Broadway and is virtually the last. Its opening founded SOHO and achieved its promise as Ivan’s proving grounds. Ivan deliberated the eventual closing of the gallery when he could no longer be its hub. He left us with clear guidelines for its duration, to which we adhere in closing, recognizing Ivan’s and our collaboration with each of you during the last 45 grand years.

The gallery’s archives will be donated to the Archives of American Art at the Smithsonian where Ivan’s personal papers already reside. 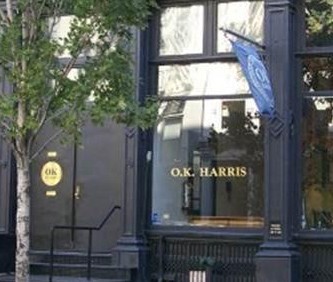