FORT LEE – After a more than 45-minute meeting with Mayor Mark Sokolich, Gov. Chris Christie took questions from a horde of local, national and global media assembled outside of Fort Lee’s Borough Hall on Thursday.

“We had a warm and productive meeting,” Christie said to both members of the press and local citizens all tightly packed together.

“We are going to work to regain their trust,” he added, referring to the local Fort Lee population impacted by Christie’s deputy chief of staff’s politically motivated order to the Port Authority to close traffic lanes on the George Washington Bridge last year.

“I apologized to the mayor,” the governor said.

A short time after the meeting, Sokolich said that “I had a cordial meeting with the governor and I have accepted the governor’s apology. I was guaranteed that this will never happen again.”

Earlier today, Christie had joked that Sokolich was not on his radar screen. Sokolich said today, also in jest, after his meeting with Christie that “I have my own radar screen now.”

Christie said he had no knowledge of the communication and today condemned it following his dismissal of both Kelly and former Campaign Manager Bill Stepien. 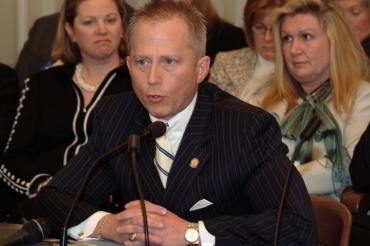