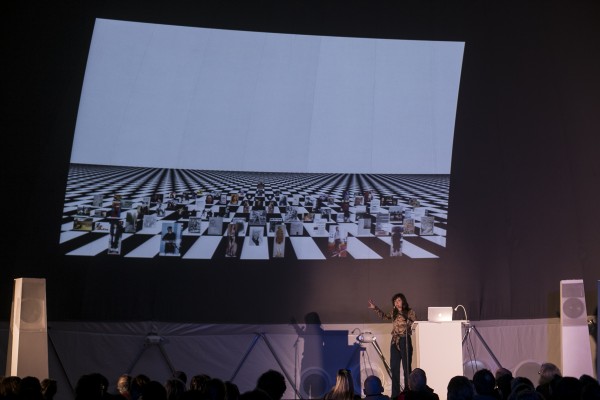 Stark with a still from her 2013 video ‘Bobby Jesus’s Alma Mater b/w Reading the Book of David and/or Paying Attention Is Free.’ (Photo by Charles Roussel)

After taking the stage to warm applause at MoMA P.S. 1’s Performance Dome on Sunday afternoon, the artist Frances Stark held up a little tissue. “I have a Kleenex, just in case,” she said with a sad smile.

Ms. Stark, who is probably best known for the funny, strangely moving videos she has been making over the past few years with transcripts of online chats that she has with strangers, was at P.S. 1 to give a lecture about her longtime mentor, Mike Kelley, who killed himself in 2012 and is now the subject of a galvanizing and almost unanimously praised retrospective that fills every gallery in the museum, as well as quite a few of its hallways and stairwells. She had titled the talk “Complex Education: Paying Homage.”

It felt like a homecoming for Kelley devotees, the audience filled with former collaborators like artists Michael Smith and John Miller, plus scores of the young artist fans and initiates who have been filling P.S.1 since the show opened. (It closes Feb. 2.)

“I’m going to start with the difficult bit,” said Ms. Stark, flashing onto the dome’s planetarium-like wall a quote from fellow Californian artist John Baldessari that read, “He was the best, a bit like Jesus I’ve been thinking.”

She recalled first seeing Kelley onstage at a lecture he gave around 1990 at the San Francisco Art Institute. “There was something about what he embodied that connected with me, with my history being like a punk rocker, a kind of a do-it-yourself, like raw, rrrr. He seemed like a rock star basically—insanely intelligent—and his work had to do with class issues that kind of came up for me.”

Though she wasn’t making art at the time, she wanted to study with him at Art Center College of Design, in Pasadena, Calif., where he taught, and so she whipped together a portfolio on the early P.C. publishing program PageMaker. She popped a slide of it onto the screen, a photo of a bodacious young woman in a bikini posing alongside a sleek white racing motorcycle.

“That’s me in the photo!” she said to admiring giggles from the audience.

“I did not even plan the photograph,” she said. Someone snapped it for her. “It’s called Total Performance. The rumor is that Mike,” apparently reviewing the application, “said, ‘If she looks like that, let her in.’ I don’t know if that’s true, but it’s a good story. The real story behind that is that I actually raced that motorcycle, and I actually got a land-speed record for real. I know that’s in some literature somewhere, a new book, an artist who hits a land-speed record—I actually got one.” (This is a central plot point in Rachel Kushner’s recent book, The Flamethrowers.) “And now, somehow, miraculously, I actually became a professor.” (She has taught at USC for almost a decade.)

From there, Ms. Stark’s presentation became one of those great, slightly unhinged artist lectures that skips quickly around its subject, making all sorts of digressions—into rap, the Resurrection, her relationship to L.A., that time that she drove Sigmar Polke around the city (he thanked her with the gift of a sweet little sketch) and her efforts to collaborate with DJ Quik on a video for the Carnegie International (“I had an intense attempt to get him onboard, and I really wanted to do something with him, to collaborate, but—haha—bitches ain’t shit”).

There followed photos of her belly with “SLUT LIFE” written across her stomach (“I have my own version of Thug Life. I can’t work out the acronym yet. … No one seems to believe me lately, but [rapper Tupac Shakur’s group] ‘Thug Life’ was also supposed to stand for the “the hate you give little infants fucks everyone”), the painting efforts of George W. Bush and John Zimmerman (presented without comment) and the somewhat rotund artist Jorge Pardo growing up in Illinois around the time that John Wayne Gacy was on his killing spree. (“We did a roast once, and one of the jokes was like, ‘Jorge’s only alive today because he wouldn’t fit under John Wayne Gacy’s floorboards.’”).

At various points, she circled back to Kelley. One thing she admired about Kelley, she said, was that he “was the kind of teacher who brought his live, intense stuff that really mattered to his work that was under construction—he brought that to the studio.” In his case, that stuff included Sun Ra, his brief involvement with the White Panthers (they called for “total assault on the culture by any means necessary, including rock ’n’roll, dope and fucking in the streets”), his boundless enthusiasm for the cult movie The Baby (Ms. Stark once played chauffeur for the bewildered for-hire director, when Kelley wanted him to do an artist talk) and the novelist Thomas Bernhard. “That’s the way I teach,” Ms. Stark said. “I’m constantly showing—‘look at this, and look at this’—I’m constantly sharing my influences with students, and I know it produces good results; I know I have a good effect on students, for the most part.”

“I give,” she said. “Maybe not everybody teaches this way, but it’s the only way I know how to do it. I give it, I give it to people.”

Kelley’s “fierce rage at institutions” also stuck with her. On that note, Ms. Stark is displeased about USC’s acceptance of a $70 million donation from Jimmy Iovine and Dr. Dre to create the Academy for Arts, Technology and the Business of Innovation. But that was a lecture for another time: “I’m going to talk about it in really ugly, disgusting detail soon, and I will be sure to invite you all to hear that.”

She showed the view from the parking lot of her L.A. studio of two stumpy, fortress-like buildings off in the distance, the sort of banal, bureaucratic structure that Kelley spent his career sullying, mocking and provoking.

“It’s called the Twin Towers, it’s the L.A. County Jail,” she said. “And I have a view of it every day when I come to work and leave work. So I think about that a lot—I think about my own freedom and what I can do and what other people can’t do.”