“Stay in Love,” curated by Chris Sharp into a brief series of Lower East Side galleries (both on Norfolk Street and with trochaic female names), revolves around the late André Cadere’s untitled 1977 “barre de bois rond,” a 32-inch-high stack of what look like wooden marshmallows painted rose, white, yellow or blue—Mondrian meets Willy Wonka. It exemplifies serial art from both directions: The piece’s broader formal parameters are taken up as a means of expression—Cadere stuck to these walking-stick-like pieces for his whole career—but the more particular program is only a jumping-off point, a way of tricking the mind into disgorging its substance. (The colors rotate, in this case, in groups of four, but Cadere introduces an error to make the pattern less immediately intelligible.)

Behind the barre, in Laurel Gitlen Gallery, a whimsically figurative sculpture by B. Wurtz points to the larger formal constraints we all share—the found ephemera it has been constructed from all relate to food, clothing or shelter—but most of the work collapses the other way. Josh Smith began making paintings of his name to preempt questions about what they meant, and Claude Viallat’s longstanding fidelity to an amoeba-shaped motif printed on raw canvas with a wooden palette, here shown in Sans titre no 57, has a tensely adversarial relationship with the other elements of the painting. In Kyle Thurman’s Untitled (120 West 28th Street, New York NY 10001), a dark fuchsia print of white flowers made by boiling the dye out of a bodega bouquet and pouring it over the sodden remains, practice and product operate in parallel.

At Lisa Cooley, conceptual projects like a triptych of On Kawara’s date paintings, Peter Dreher’s hyperrealistic oil painting of a glass (one of thousands of portraits of the same glass) or an acrylic-on-canvas “detail,” somewhere in the three millions, of Roman Opalka’s now nearly five-decade-long ambition to paint all the whole numbers from one to infinity, are like fractals, as clearly serial in their single iterations as when viewed in multitude; while Maureen Gallace’s small oil beachscape Early September, or Yayoi Kusama’s Flower, a 1978 gouache of golden dots, seem relieved to be liberated from their projects. What best splits the difference is Linda Fregni Nagler’s The Hidden Mother, a collection of early found photographs documenting the bizarre strategies mothers used to employ to get shots of their squirmy babies sans Mom, despite slow shutter speeds. Infants sit serenely on human figures menacingly covered in blankets; in one case, a toddler can’t stray, because he’s hanging from a trapeze. (Through Feb. 2) 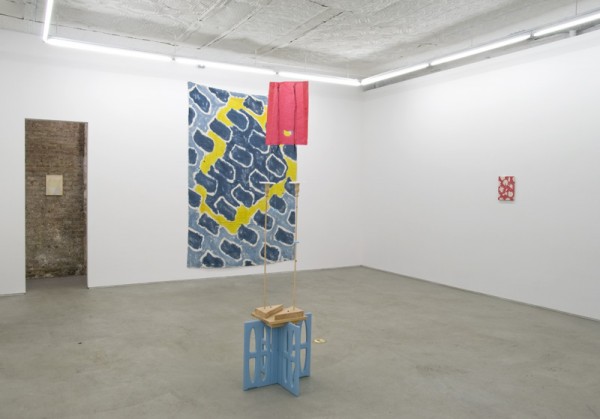