The Daily News seems to have made a New Year’s resolution to go after the Post at every opportunity. Although the rivalry between the city’s tabloids has been a long- simmering grudge match, the News has been ratcheting up its attacks in the past two weeks.

On Monday, The Observer was among the outlets receiving a press release from New Yorkers Against Gun Violence, quoting remarks about the Newtown shooting that Post columnist and radio host Fred Dicker had made on his show.

Poor choice of words, to be sure, but an actual story?

It was for the News, which put it on the front page on Tuesday: “N.Y. Post big’s shameful Newtown diss.” (Apparently, an Albany columnist qualifies as a “Post big.”)

Inside, the News raged: “Horror of 20 children slaughtered is neither little nor convenient, jackass,” read the headline inside the paper. “Outrageous.” Neither Mr. Dicker nor the New York Post responded to OTR’s request for comment.

This was only the latest of the News’ pot shots against its rival tab.

Last week, Confidential, the Daily News’ gossip page, posted an item refuting “new stories making the rounds” that ex-Governor Eliot Spitzer and his political operative girlfriend got frisky in a public hot tub on their recent trip to Jamaica.

It was a reference to an as-yet-unpublished front-page Post story alleging that Mr. Spitzer sucked on the toes of a topless Lis Smith in front of children at the resort where they stayed over the holidays.

According to sources at the News, the paper heard that at least one right-wing antagonist was promoting the Spitzer story before it was published, but the News had decided that the sourcing didn’t hold up.

In a follow-up story, the News marshaled hotel receipts that showed checkout times, waiters at nearby restaurants and photos to disprove the account by “the rapidly imploding down-market New York Post.”

The Daily News also called the Post a “down-market New York tabloid newspaper” in a story about backlash over the Post’s front page about slain Hasidic businessman Menachem Stark, which carried the headline, “Who Didn’t Want Him Dead?”

It’s unclear what’s fueling the News’ venom of late, but if you want to know what’s going to be in that paper tomorrow, there’s a chance you’ll find it in today’s Post. 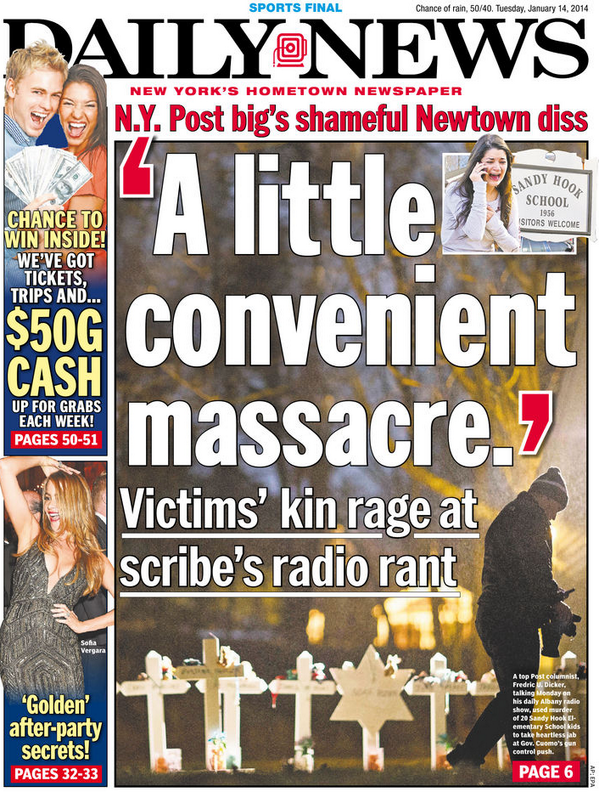