On a 9 a.m. on a recent Tuesday, I felt terrible. The room was spinning and making me seasick. I had a strong urge to throw up in whatever corner I could get to fast enough. There were strange patches of black ice where the memory of the night before should have been.

I’d been hungover before, but this morning it was going to serve a purpose. The previous evening, I had skipped dinner and drank a succession of whiskey ginger ales, slowly graduating to just straight whiskey, in anticipation of a visit from The I.V. Doctor, a new service that takes “concierge medicine” to a new level, with intravenous solutions to your next-day fuzzies made via house call.

Not long after being roused from unconsciousness, the doorbell rang, doing nothing for my headache, and a buff surfer-looking bro called Mike tromped up the staircase with a small suitcase. Mike was there to hook me up, quite literally. With any luck, he’d be my hangover cure this bleak morning.

With the ease of a trained operative in a movie, he opened his suitcase and began assembling his small arsenal, which included 1,000 milliliters of saline and “lactated ringers” (sodium chloride, potassium and lactate), needles, a folding stand and small bottles of various colors: a specially-mixed cocktail, different from last night, of anti-nausea medication (Zofran), a high-level anti-inflammatory (Toradol) and Pepcid—all guaranteed to “cure” me.

The I.V. Doctor, a relatively new practice of home hydration therapy via needles, began promoting their wares on New Year’s Eve, when they took a cue from the infamous Hangover Heaven bus in Las Vegas and began rolling up to nightclubs in New York on wheels. The brainchild of Dr. Elliot Nadelson, a urologist who teaches at Beth Israel Medical Center, The I.V. Doctor offer a number of different packages that start at $199 for a basic detox cleanse, going up to $249, which would guarantee 24/7 access.

“Just relax,” Mike urged as he uncorked the tiniest of butterfly needles. During our “vetting” process, Dr. Nadelson had given me a medical check-up over the phone, asking about any history of kidney problems and whether or not I could “walk ten blocks.” I was in fine health, I told him, but had notoriously small veins. He had told me that wouldn’t be a problem, but as Mike used his alarmingly buff arms to tie one of those rubber tourniquets around my arm, he looked momentarily disconcerted by my complete lack of trackable blood vessels.

“Usually we use a bigger needle, and we can get the fluid in much faster,” he grumbled, finally finding a small vein near my wrist. After being stuck, I focused all my energy on not hurling. (To be fair, I’ve never been good with needles, but who is?) Still, compared to an antiseptic hospital room or doctor’s office, there’s something to be said for being able to half-faint on my own damn couch.

“Just relax,” Mike repeated, squishing the bag down to get the fluid into me that much faster. He would be going to his a shift at a hospital’s emergency care ward after he finishes up with me. (Along with his last name, he declined to mention which hospital; he said he didn’t it want on the record, but failed to elaborate.) There was a rush of cold as the fluid entered my bloodstream. Mike mentioned that, If I wanted, he could “throw the bag into the microwave” to warm up the saline. I declined: Already, I was more awake. It felt like being thrown in a frozen pool.

“Isn’t that dangerous?” I asked as he squeezed the bag once more, trying to cut down the time it took to get all those electrolytes into my body. (It would generally take 16 minutes, I was told, but my tiny veins were slowing down the process). “What about air bubbles?”

“Air bubbles are obviously bad,” he said. “But you need a pretty large air bubble to do something. It isn’t like in the movies.”

But I was expecting a Valley of the Dolls revelation of vitamin shots! Maybe minus the major amounts of amphetamines, but I wanted more of a kick. So I asked for some “vitamins” myself; just for a little pick-me-up. I didn’t care what letter of the alphabet they were, just put them in my body and let me see the stars.

“A lot of people are deficient of Vitamin B,” Mike lectured while prepping to have me continue mainlining health. “It gives you a little boost. It definitely makes you feel a little bit better if you wake up and you’re just not feeling up to yourself.” I was also told that Vitamin B was important to neurological functions. “For your brain to basically fire on all cylinders you should be sufficient in Vitamin B,” Mike said. “You might not be deficient in it, but a little boost won’t hurt.” Shoot me up already, doc!

“You can get as much as you want in the CVS over the counter version, but nothing is going to compare to directly into your vein,” he continued. Maybe it was a placebo reaction, but I started to feel a little bit giddy. It wasn’t comparable to a narcotic, but only about halfway through the treatment, I started feeling better. I didn’t want to run a marathon or flip over a car. But I was returning from the edge.

In fact, I felt better than I had all week, all month, maybe: I wasn’t hungry, I wasn’t exhausted, I wasn’t sick, and I kind of didn’t even want to die rather than face another miserable, dark January day.

In other words, I felt fine. Anyway, it was cheaper than therapy. 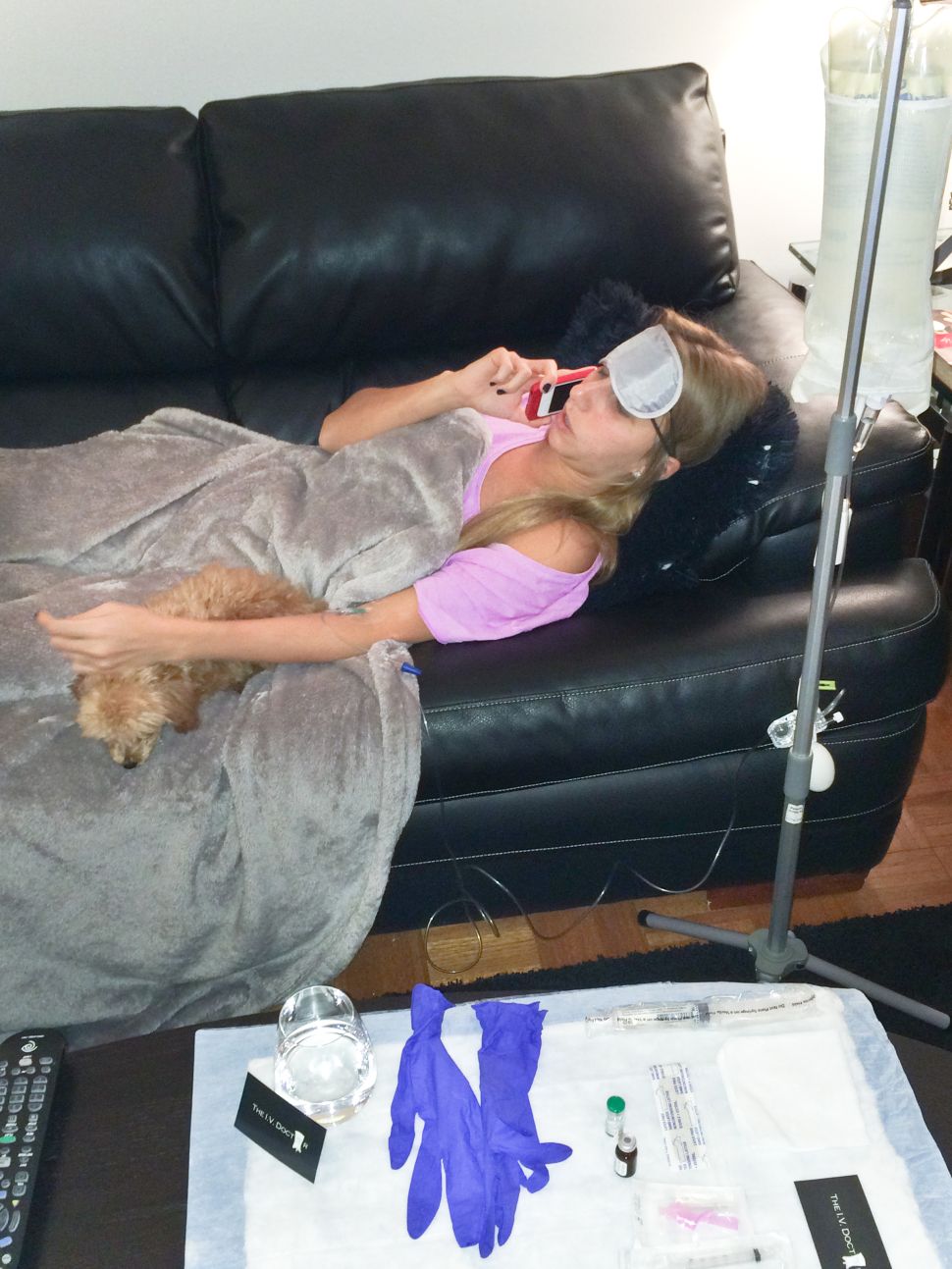