The mayor says the senate bill in question is 3096, co-sponsored by state Senators Brian P. Stack and Sandy Cunningham. The bill would bring Jersey City’s pension system into alignment with the state pension system.

Fulop says Sweeney is still smarting over comments the mayor made last year about how Democratic Party leadership in Trenton has been less than courageous in the face of Republican Gov. Chris Christie.

“Anybody who puts a personal vendetta ahead of the public good isn’t only spineless, but doesn’t deserve to hold public office,” Fulop said.

The comment spurred a sharp rebuttal from Sweeney’s office, which suggested Fulop was more geared toward playing political games than “focusing on his job.”

Fulop said Sweeney should post the bill this Thursday.

“This bill has unanimous bipartisan support in the Assembly,” the mayor said. “It is in line with everything the Senate President and the Governor have said in their rhetoric.”

A source in Hudson County described Sweeney’s reluctance to post the bill in question as “the first tangible shot in the war” between Sweeney and Fulop.

“Steve and Steve have done this dance for the last three months now,” said the source. “I dont think Steve Sweeney is going to be helpful to any legislation the mayor wants. It’s not because of anything the mayor said. It’s the perception that he’s a gubernatorial candidate.”

Sweeney is also a potential candidate for governor.

He did not immediately respond when asked to comment. 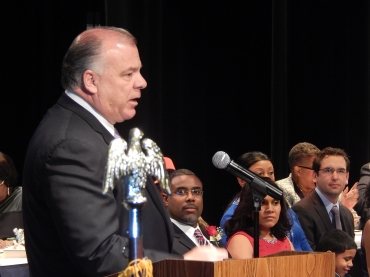