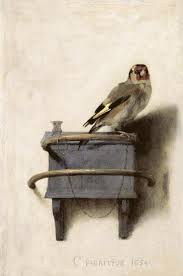 If you’ve attempted to take a stroll down Fifth Avenue on weekends, during the recent holidays or really any time since Oct. 22, you will have had to dodge the long, snaky line wrapping around Henry Clay Frick’s old home. Though some patient visitors might just be waiting for the chance to see Johannes Vermeer’s famous Girl With A Pearl Earring, intrepid literary fans are queuing up for another traveling treasure: The Goldfinch by Carel Fabritius. The tiny panel is enjoying new celebrity thanks to Donna Tartt’s novel of the same name, and fans of the book shouldn’t miss the chance to see the painting in person. The Royal Picture Gallery Mauritshuis in the Hague doesn’t lend its treasures out all that often, and these paintings, plus 13 others comprising the Frick Collection’s “Vermeer, Rembrandt and Hals: Masterpieces of Dutch Painting from the Mauritshuis” show haven’t left the Netherlands in nearly 30 years.

In an opening scene of Ms. Tartt’s book, the protagonist, a 13-year-old boy named Theo, and his mother visit the Metropolitan Museum of Art to see a show of Dutch Masters. Here, he describes the painting:

It was a direct and matter-of-fact little creature, with nothing sentimental about it; and something about the neat, compact way it tucked down inside itself—its brightness, its alert watchful expression—made me think of pictures I’d seen of my mother when she was small: a dark-capped finch with steady eyes.

Theo’s mother explains that Fabritius was Rembrandt’s student and Vermeer’s teacher and that he was killed in the famous explosion of a Delft gunpowder factory that also destroyed much of his work. “Anyway, if you ask me,” Theo’s mother continues, “this is the most extraordinary picture in the whole show. Fabritius is making clear something that he discovered all on his own, that no painter in the world knew before him—not even Rembrandt.”

There you have it! With only nine days to go until the exhibition closes on Jan. 19 (really eight as the Frick is closed on Monday), time is running out to see the diminutive masterpiece. Members get to skip the long line, but during my visit, I overheard a guard telling another not to let any new members (people who signed up online but don’t yet have their temporary cards) into the show. With that in mind, adjust your line-skipping strategies, and get to the Frick forthwith.