Last week, the artist Liz Glynn was standing with me in the back room of Paula Cooper Gallery’s space on 10thAvenue, beneath the busted hull of a to-scale 18th-century shipping vessel she had constructed for her new exhibition. It was hanging by rope from the ceiling. She built it with hardwood, which is not easy to find in Los Angeles, where she lives, and used traditional planking techniques to assemble it. The piece, she said, is an homage to piracy and “thieves taking everything that they want off a ship and then burning it and then allowing it to sink,” something she researched intensely through journalistic accounts, along with Daniel Defoe and “The Wreck” by Alfred Lord Tennyson.

“The captain of the ship would protest at the pirates cutting the anchor,” Ms. Glynn said in a voice that was much softer than her subject matter. “He would say, ‘Why are you cutting the anchor?’ And the pirates would say, ‘Well, we’re gonna burn the ship. You don’t need an anchor.’” In another room was a large, rusty anchor that she had built out of papier-mâché. She’s interested “in an object carrying this latent violence,” she said.

Ms. Glynn is a sculptor who says that sculpture is “not about making stuff.” But she grew up in Boston, the daughter of an architect and an engineer so that “making stuff” was only natural. She started out wanting to be a photojournalist, until she started studying conceptual art and “became unable to take a picture because it became too problematic.” In her new show—her first with Paula Cooper Gallery, whose roster she recently joined—there are papier-mâché reconstructions of Roman busts, Julius Caesar’s robes, Ming Dynasty plates and other objects that have been pillaged and salvaged throughout history. The idea is not to call to mind the specific objects themselves, but their referent, a historical narrative and not an aesthetic one. She’s more author than artist, exchanging in stories rather than materials. (Hers are always recyclable, the hardwood ship aside, and secondary to an idea.)

One of those stories, her starting point for this show, was the rise in Somali piracy and the unstable governments and economies that account for the uptick. (No, she has not seen Captain Phillips.) In 2009, she created III, a nearly 20-foot-tall pyramid made of shipping pallets, constructed in the hills above L.A.’s Chinatown around the time Bernie Madoff’s ponzi scheme was exposed. She invited people who were out of work, including one 55-year-old man who lost his job of 30 years and was living back home with his parents, to share unemployment stories inside the structure. 24-Hour Rome Reconstruction, a miniature model of the Republic built over the course of a day (1.238 years per minute), was inspired by the Bush administration’s fondness for the platitude that Rome wasn’t built in a day in reference to the Iraq War. Ms. Glynn called this her most “referential piece” but added that, in real time, there are scheduling snafus that make the city not wholly work on a molecular level, “but the big picture functions,” she said. “We do the best we can.”

When I arrived at the gallery to interview Ms. Glynn, four women draped in heavy fabric were huddled with the artist, as if scheming. They were going to be part of a one-night performance in the gallery later that night involving dramatic opera singing around Ms. Glynn’s ship, but before that, as an invisible performance, they were instructed to leave the island of Manhattan and travel back to the gallery first by ferry and then on foot. They were Ms. Glynn’s sirens, and she wanted to make them work for their shipwreck instead of just sitting on some rock as in Homer and letting it come to them. This was an invocation to the metaphor of piracy and salvage, Ms. Glynn’s particular muse this time around, but also, she said, to the history of “the long walk” in performance art. It was a terrible night for a long walk, though, a real January thunderstorm. The women left the gallery three hours early, and then who knows?

IT WAS A MISERABLE LATE afternoon while I was hanging around Chelsea waiting for the performance to begin. I sat inside West Side Tavern, one of those entirely ambiguous Manhattan bars that is neither a dive nor especially nice and is filled with essentially featureless middle-class stiffs stopping in on their way home from work, though it was harder to generalize on a Saturday. There were three men at the bar including myself, sitting and looking ahead at nothing. Occasionally, I would force a thought about the four women who were currently traveling across water to get back into Manhattan for their performance at the gallery. I knew that was the point, and I was aware at the time I wanted to write a sentence questioning whether a performance is still a performance if the audience isn’t in the room, either by bringing up the cliché about a tree falling in the forest or by quoting Andrew Ramsay’s crude reading of the meaning of his father’s philosophy books in To the Lighthouse: “Subject and object and the nature of reality. …Think of a kitchen table when you’re not there.” The bartender was playing “Honk If You’re Lonely” by the Silver Jews, which, on top of being so laughably on the nose that I rolled my eyes painfully, has also, with apologies to David Berman, really not aged well. He played it twice.

“Excuse me,” the guy next to me said, “but are you having the deepest thought in the world right now?”

“I’m just having a drink. I only appear contemplative,” I said. 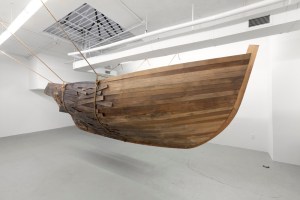 Installation view of Liz Glynn’s “On the Possibility of Salvage.” (Courtesy the artist and Paula Cooper Gallery)

WALKING TO THE GALLERY, I saw one of the performers, wrapped in a heavy red robe, holding a mangled umbrella and unknowingly dragging the cord of a microphone through the puddles on 10th Avenue. Each of the four sopranos that would appear in the gallery had microphones, and Ms. Glynn wanted them to record the sound of their travels, though they were forbidden from speaking to anyone. (I only learned of that last rule in an interview a few days later, which retroactively interpreted the anxious and apologetic silent look this performer gave me when I said, “You’re dragging something on the ground.”)

Inside, Paula Cooper and her two directors were standing intently in a circle around Ms. Glynn’s sturdy-looking sculpture of an anchor. From a distance, it really could have passed for an old barnacled anchor, up to the point where Ms. Cooper picked it up with one skinny arm and repositioned it as if she were moving an old folder from her desk. The performance was scheduled to begin at 7:15 p.m. Right on cue, a woman in a maroon robe with wet hair walked stoically through the front door, mostly unnoticed by the crowd, which she strategically glided past. She tucked herself away into a corner of the back room, beneath the stern of Ms. Glynn’s broken ship. She sang in a voice so powerful in a room so small it was hard to tell that what she said was in English: “Plunder and gain.” The next performer entered. The crowd, aware that something was happening now, parted like a sea for her as she made her way to the other room singing snippets of Wagner.

Two more robed women, one singing from Verdi and another singing lines from a Somali pirate’s ransom note, joined them. The dampened robes and rain-soaked hair only slightly grounded everything in something resembling reality. The voices came in sudden spurts, one brief line at a time, and for a while what the audience heard was mostly silence. Then the four women started to march funereally in a circle around the ship, their voices starting to meet up until they were all singing simultaneously. This had more in common with a fugue state than a fugue in the classical sense, a kind of delirium that registered only as white noise until—in an eerily significant gesture—the most powerful singer touched the boat with her hand (it was the first and only time anyone did so) and reached an eardrum-shattering climax with her vocal part. Then they left the room in silence.

The next week, I called Holly Nadal, the first singer to enter the gallery, to essentially ask her what a person does when you’re not there. Ms. Nadal had the displeasure of traveling to Staten Island by ferry in the rain. She described her microphone, which was taped to her body under all her robes, as “exotic” and was worried that the police checking the passengers’ bags would think she was carrying some kind of high-tech bomb.

“I have this cape,” she said. “I wasn’t carrying an umbrella. So I was all wet, looking kind of like a bag lady. And there’s all these police checking people before they go on the ferry and all these random announcements: “If you see something say something,” and “passengers are subject to random search by police.” And I was thinking, how am I going to get this microphone out from under the cape and be able to turn it back on again? I was thinking, what the hell am I going to tell the police if they try to stop me?”

The NYPD, perhaps because they are accustomed to bag ladies, didn’t cause any problems. Ms. Nadal’s plan was to get right back on the ferry once it docked at Staten Island, but when she got ashore, the ferry went out of service. She had to wait for 30 minutes. In the rain. Ms. Glynn wanted her performers to walk back to the gallery from their various ports in Manhattan, but back on the other side of New York Harbor, Ms. Nadal decided to take the subway at least part of the way. She only had a dollar on her card. The machine was broken at the stop she had entered, so she walked to a different station and ended up on a 5 train that took her to the wrong side of the island. There’s enough that goes on when we’re not around as witnesses that it’s easier to simply repress it. But even though Ms. Nadal was sweating as she jogged across Manhattan while I privately mocked patrons at a bar, she still managed to be the first to arrive to the performance. To steal Ms. Glynn’s phrase, “We do the best we can.” 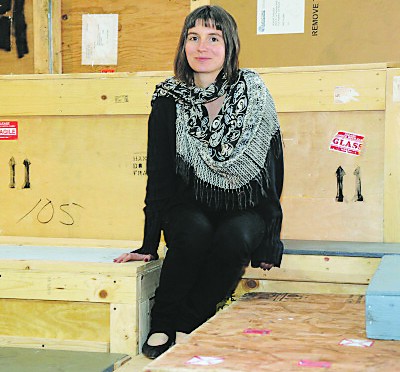