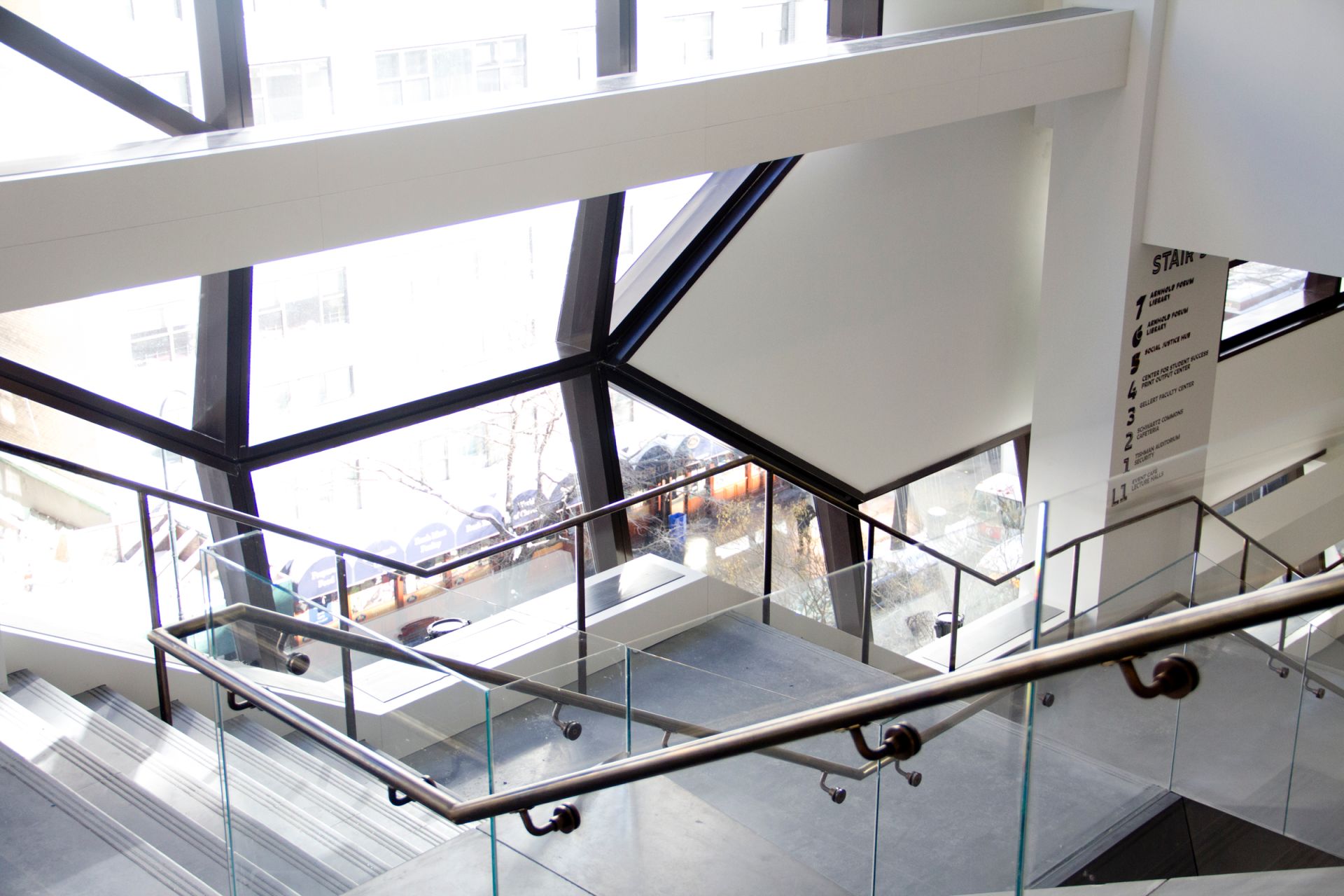 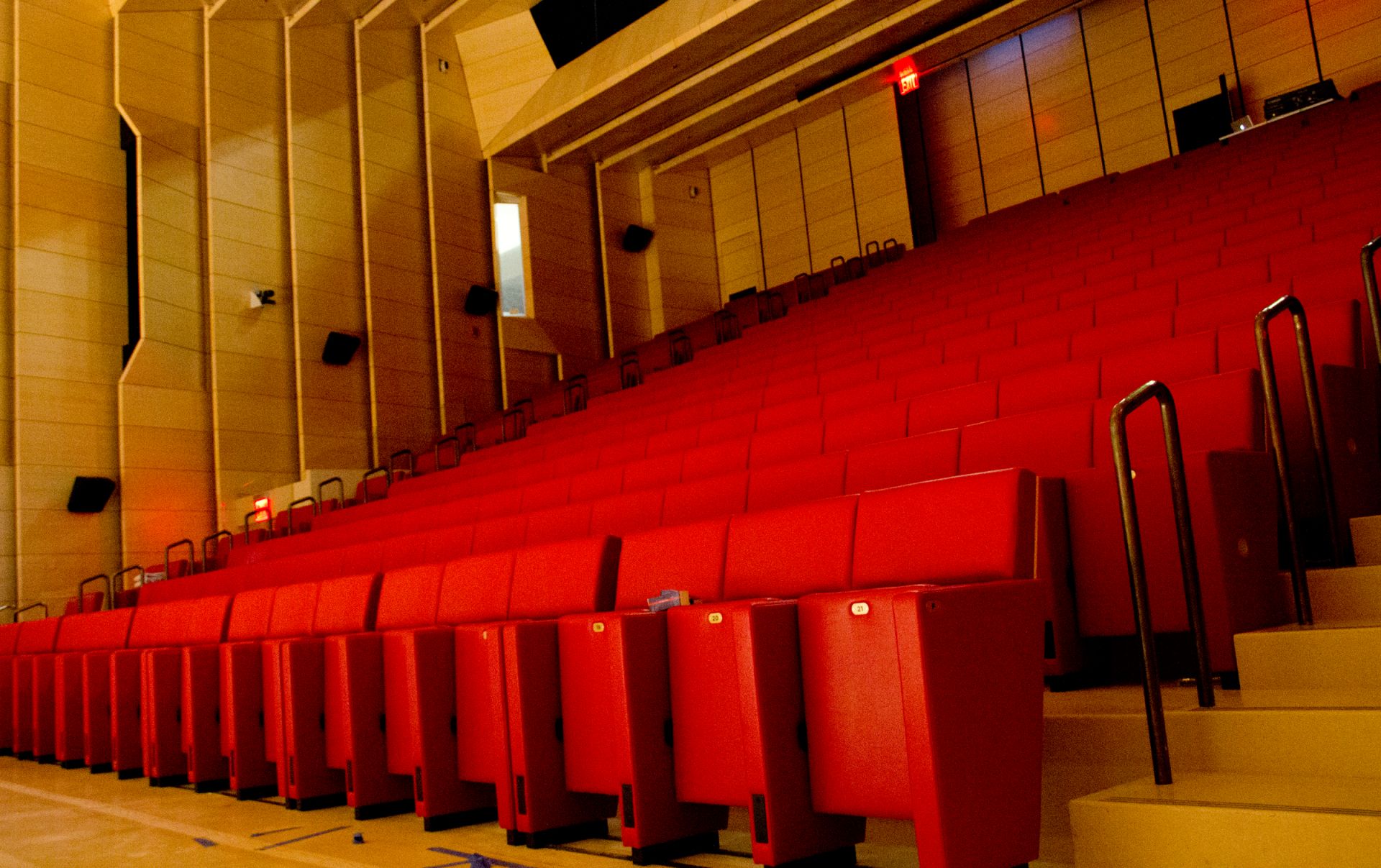 The theater can be configured into 600 or 800 seats. (Kasia Broussalian, The New School)
kvelseyobserver 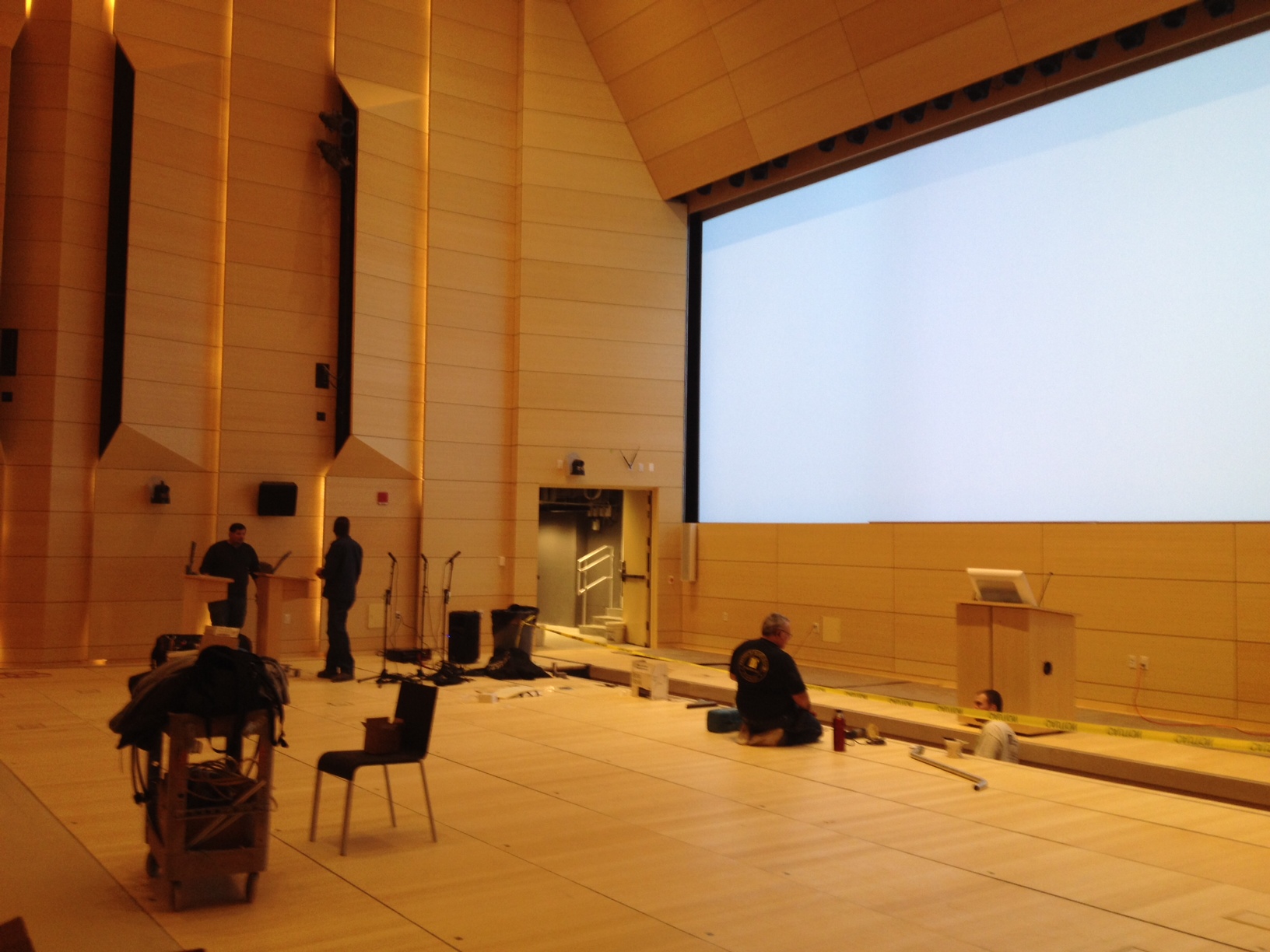 The theater can expand from 600-seats to 800. (Kim Velsey)
kvelseyobserver 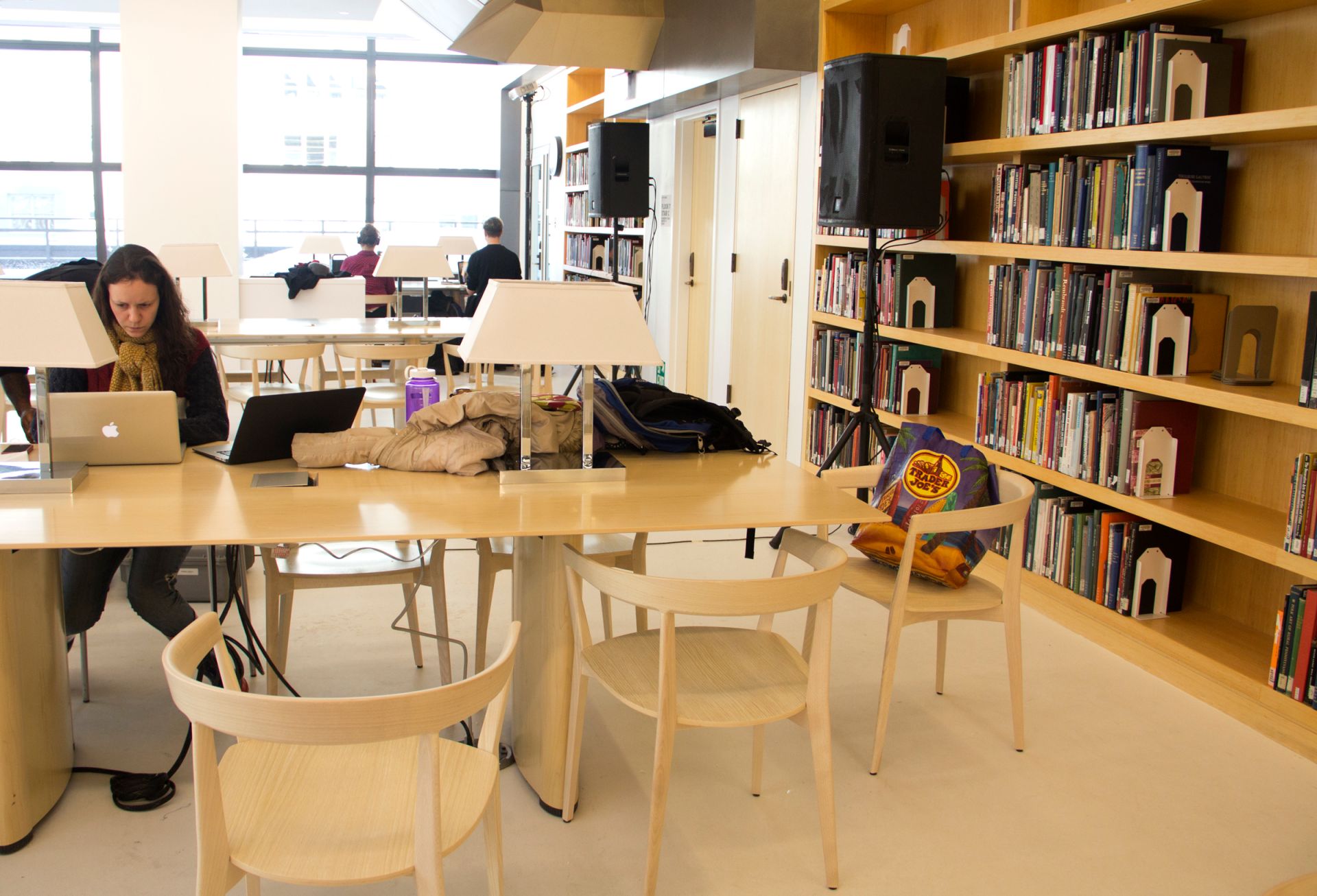 The library at the University Center. (Kasia Broussalian, The New School)
kvelseyobserver
Advertisement 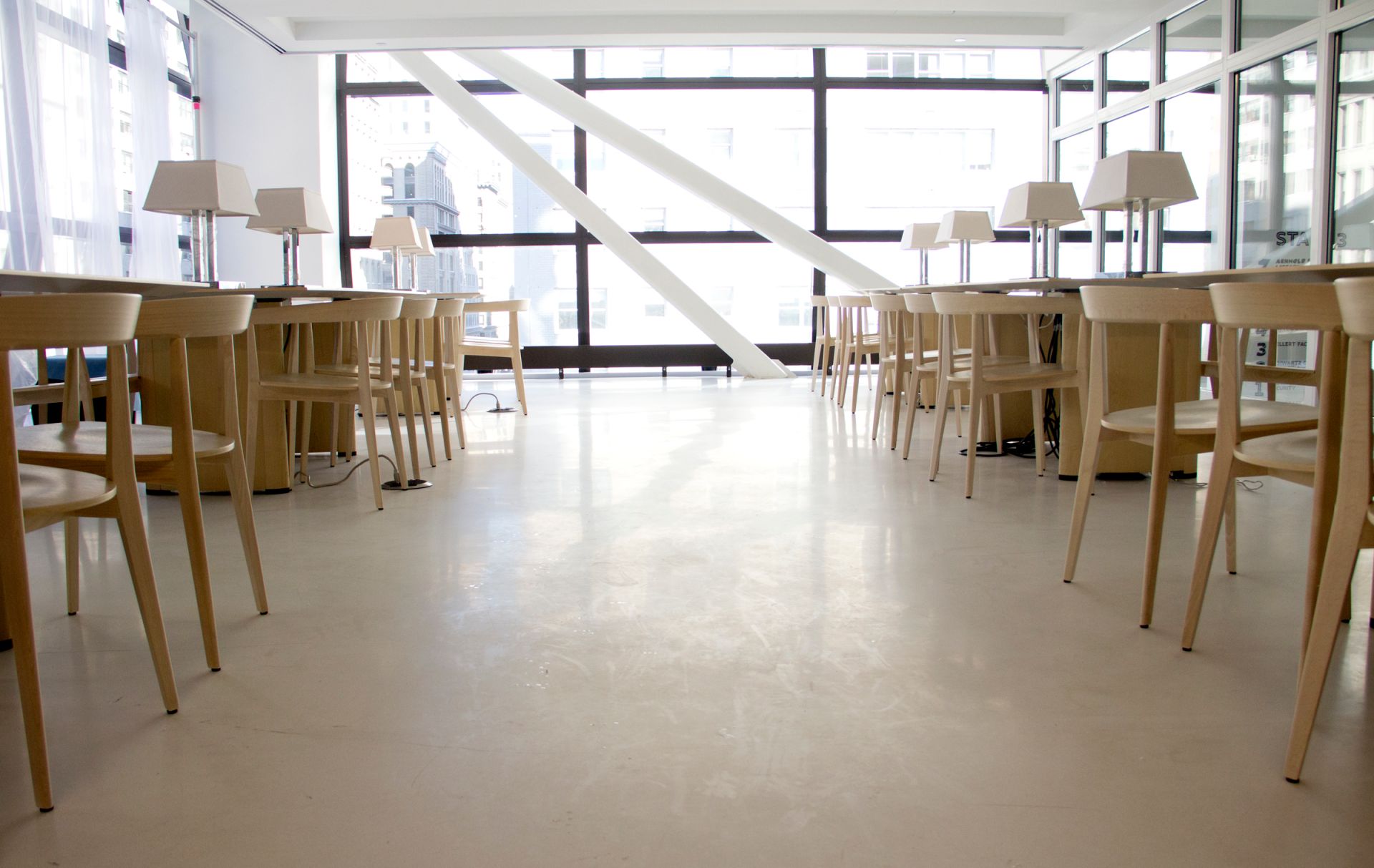 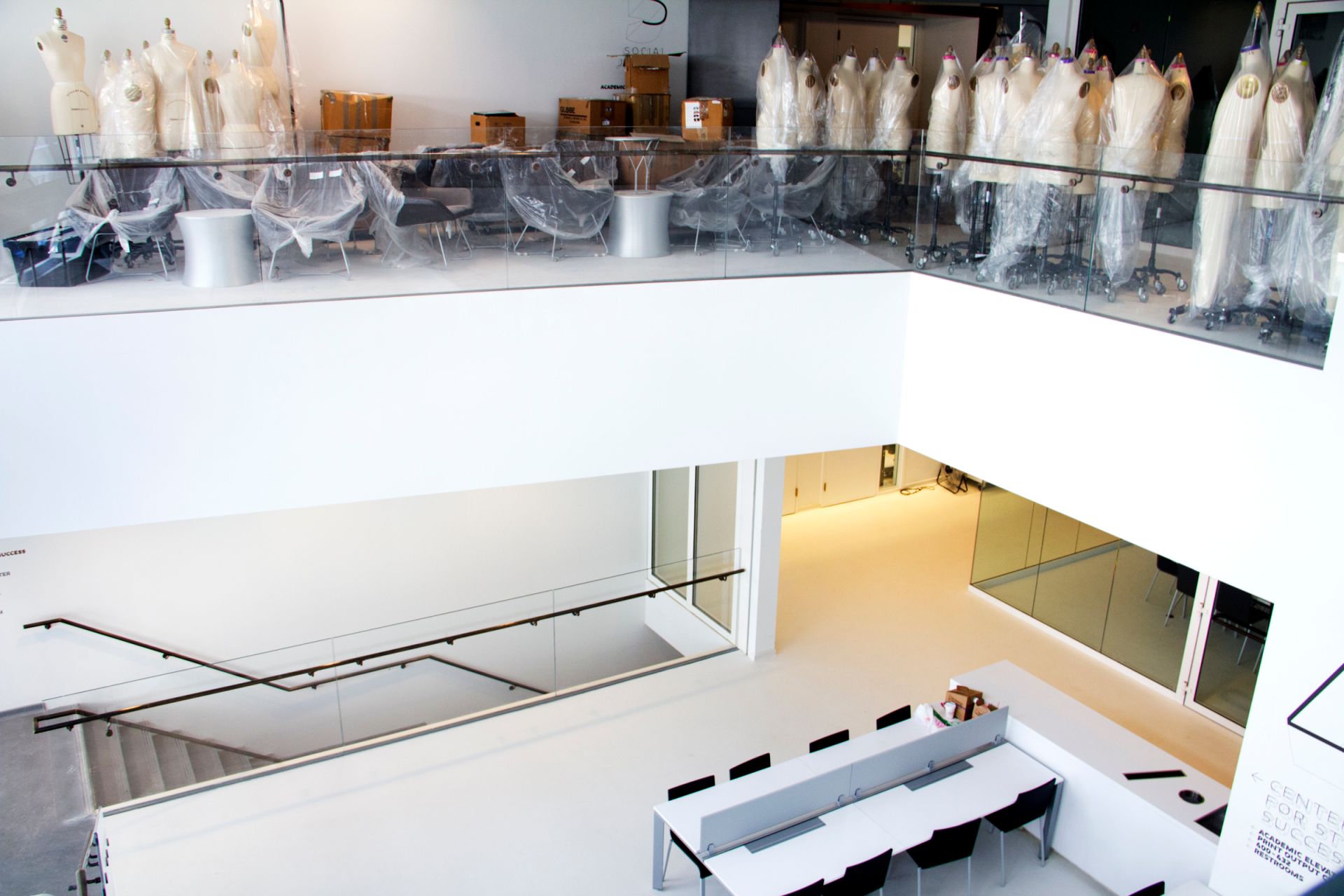 A view of the classrooms. (Kasia Broussalian, The New School)
kvelseyobserver 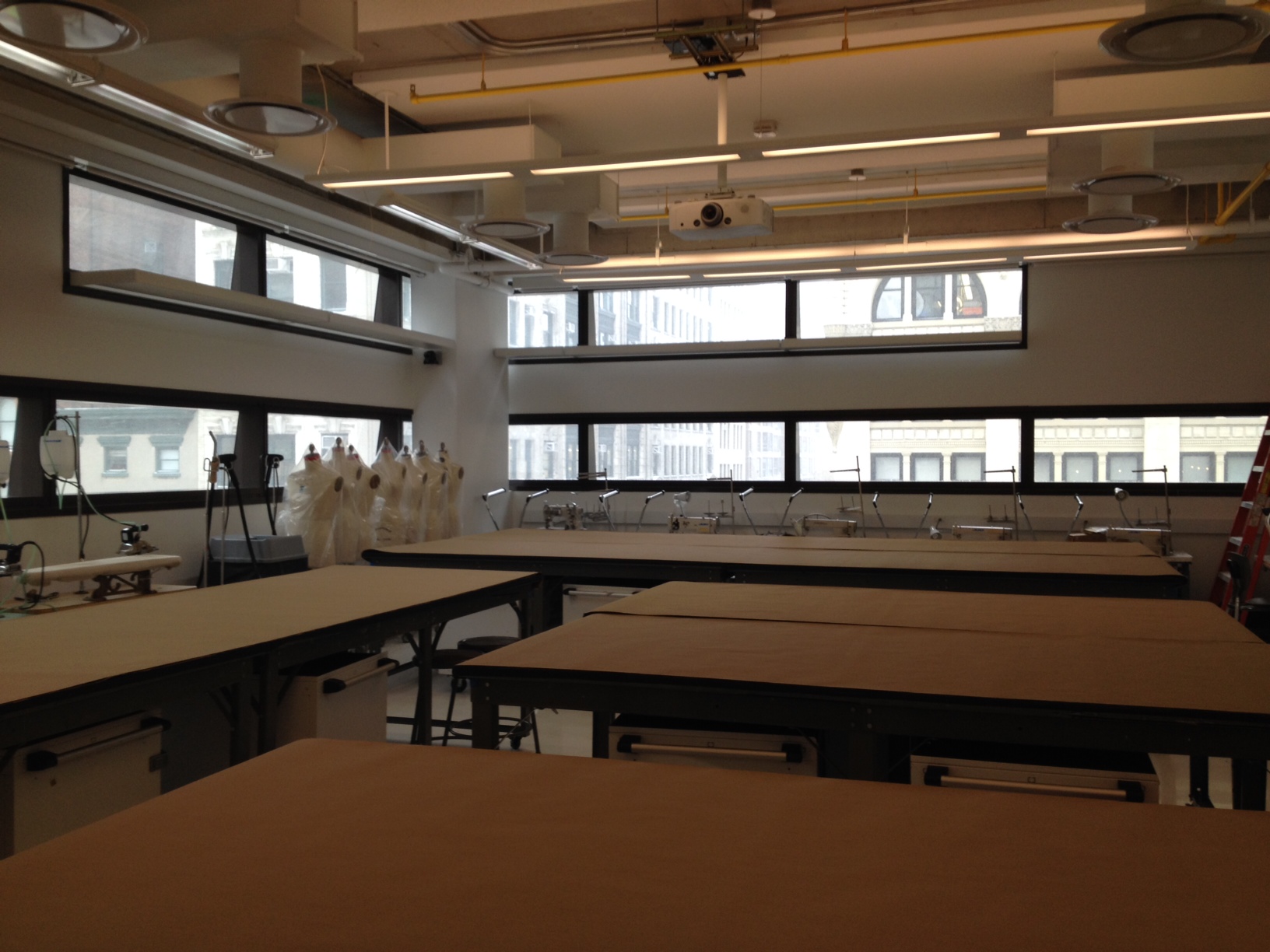 A classroom, with double sets of ribbon windows for view and light. (Kim Velsey)
kvelseyobserver
Advertisement 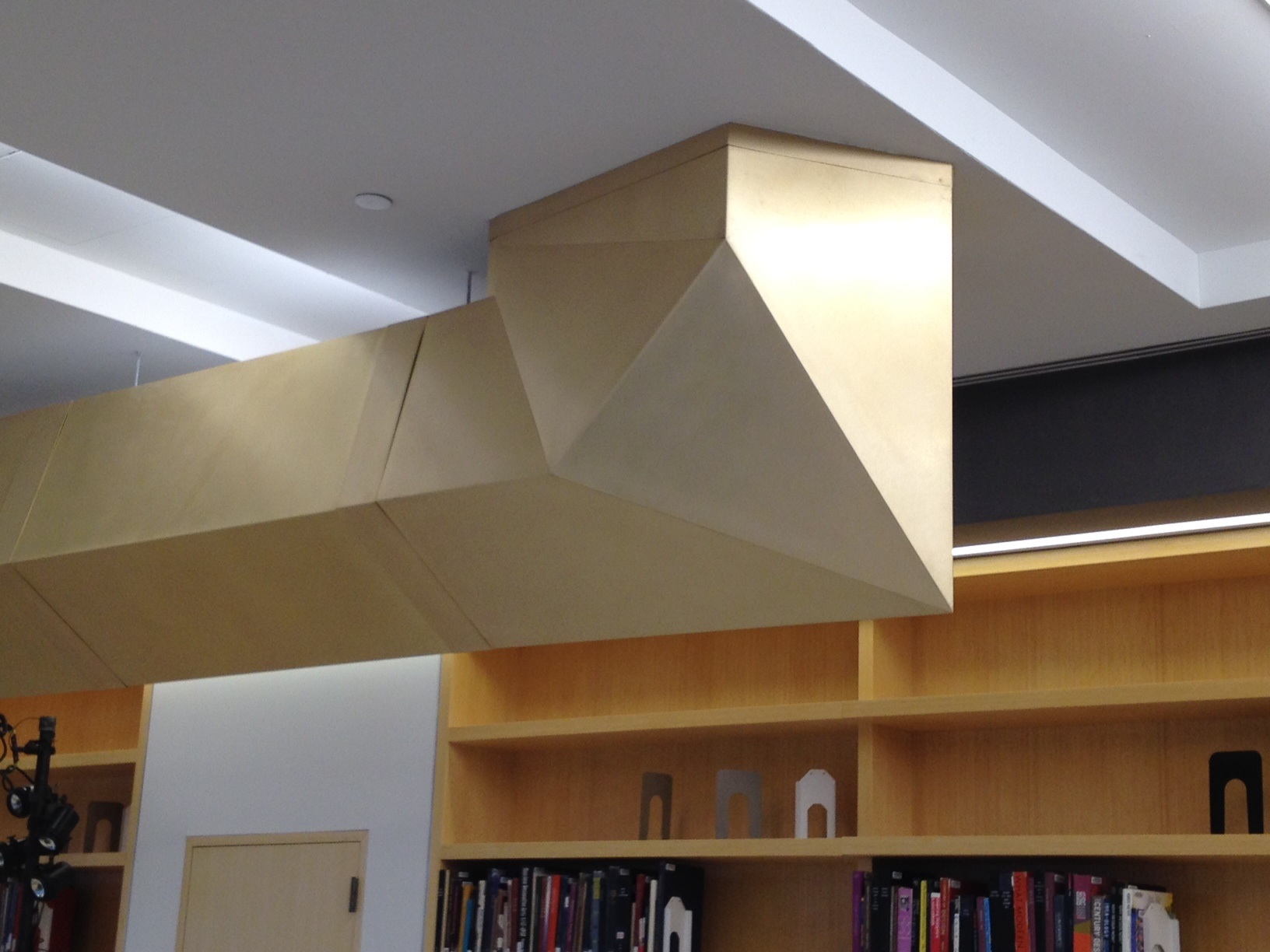 The air ducts to the fire stairs, which are exposed, have been covered in brass. (Kim Velsey)
kvelseyobserver 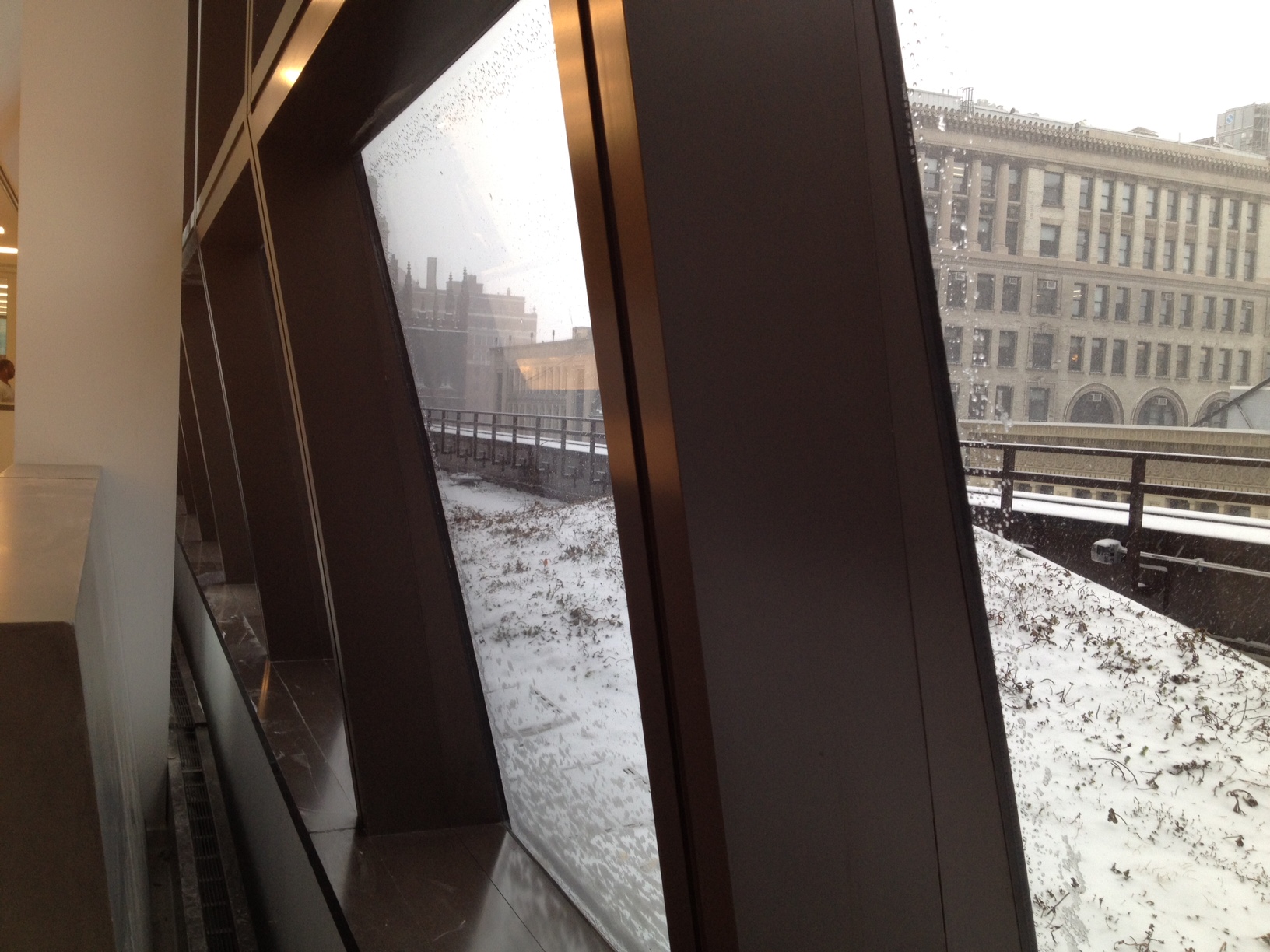 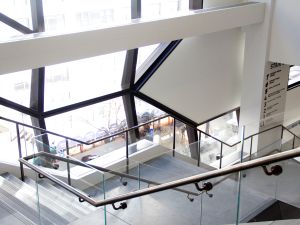 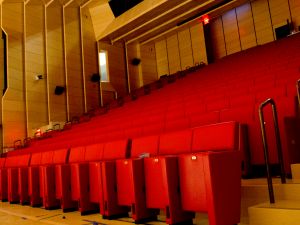 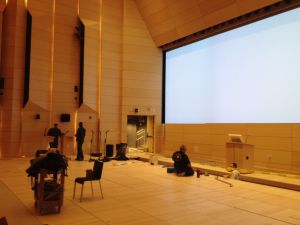 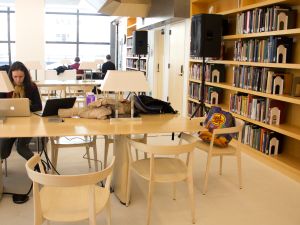 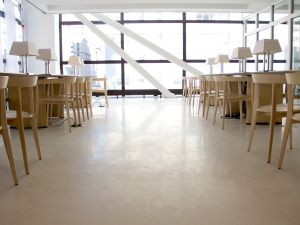 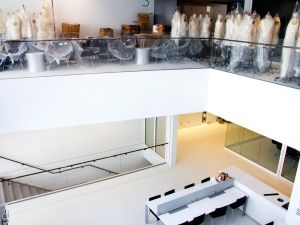 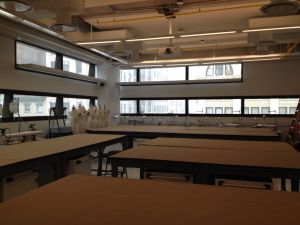 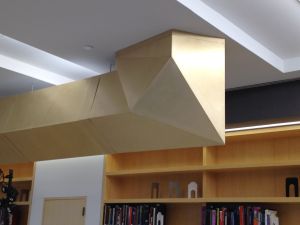 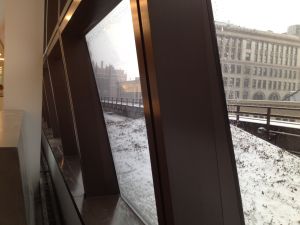 A week before the New School was set to open its new 375,000-square-foot University Center at 65 Fifth Avenue, a main burst at the corner of Fifth and 13th, flooding the new building’s cafe/event space and ground-floor classrooms—necessitating several months of extra work on the flooded areas. Nonetheless, the 16-story brass and glass building, which represents the largest construction project in the university’s history, will open its doors on Thursday. (Meanwhile, city workers continue their efforts to repair the broken main out front, laboring in a giant pit that has shut down Fifth Avenue for more than a week.)

The boxy building, which has a theater, classrooms and an auditorium on the lower levels and student housing on its upper floors (the housing portion opened in late August), has otherwise been low-drama, a rarity in a city where university expansions have a tendency to turn into high-intensity battles over neighborhood identity. No doubt, the school’s no-fuss reception is in no small part due to its relatively diminutive size. Compared to NYU’s planned 2 million square-foot expansion, the edifice might as well be a miniature. (Despite a court ruling barring NYU from using park land for construction staging areas, the University remains free to carry out the mammoth, one-million-square-foot “Zipper Building” it has planned.)

And though the University Center is large by New School standards—its decentralized Greenwich Village campus totals only 1.2 million square feet—the New School does not see the project as an expansion, so much as a consolidation of its somewhat dispersed programs.

“At least in the moderate, near-future I don’t see substantial growth in student body size,” New School president David Van Zandt told The Observer. “Really, why we need this building is to integrate all our programs. The idea is that students for all of the programs will have studios or classes in the building. The idea is that you run into people in a way that you can’t right now.”

Which is why, perhaps, the New School was so willing to forgo the few extra hundred thousand square feet of its original, all-glass proposal after a somewhat negative community reception. (The current structure is an as-of-right project built on land owned by the school; the $353 million project was approved by the board of trustees in 2010.) The new building, by Skidmore, Owings and Merrill’s Roger Duffy, has 230,000 square feet of academic space, 135,000 square feet of dorms and 10,000 square feet of retail on the ground level.

The building is designed to facilitate meetings and conversation, with levels connected through the wide, sunlit staircase that runs along the exterior walls of the building, studded with “skyquads”—spacious landings and alcoves staged along the staircase, which are intended to reproduce the communal, stop-and-chat atmosphere of a more suburban, park-like campus, according to Jon Cicconi, an SOM associate with whom The Observer toured the building on a recent, snowy morning.

Besides the staircase, which is shadowed underneath by a fire stair, giving the building something of a dizzying, Escher-like doubleness, the structure is also distinguished by its unusual double bands of windows. The bottom row is intended to provide views, while the top, with reflective shelves, minimizes the need for artificial lighting during the day. The building is expected to be LEED-gold certified, which also accounts for its ratio of about 35 percent glass to 65 percent bronze—what Mr. Cicconi described as the optimal ratio for both natural light and insulation. “We were looking at both brass and copper, but we wanted it to age in a distinguished way,” said Mr. Cicconi,

In a city wearying of glass towers, warmer materials such as metal cladding, stone and brick have become increasingly popular. And other efforts have also been made to integrate the structure into the surrounding neighborhood, including massing that reflects nearby Ladies’ Mile buildings constructed in the 20s and the 30s. The University Center’s unusual stair structure also provides peek-a-boo windows, odd corners and unusual vantages more commonly found in Victorian buildings or industrial conversions.

But many elements are distinctly of the moment, including its exposed ceilings and ducts, as well as its bamboo-clad theater, which will hold Parsons’ fashion shows, as well as musical and theater performances. It represents the first such large performance space—it can hold 600 to 800 people depending on how it is configured—that the university has had.

Mr. Van Zandt, who arrived in December of 2010, after construction on the building was already underway, said that though he was initially hesitant, he has warmed considerably. “When I first saw some models, I thought, ‘oh that kind of looks boxy and odd,’ but as it went up it, I found that it really is a spectacular space.”

He said that the student reception has been largely positive, so far: “The students in the dorms love it. One senior who moved in there said it’s probably the nicest place I’m going to get for the next 10 years.” We don’t doubt it.