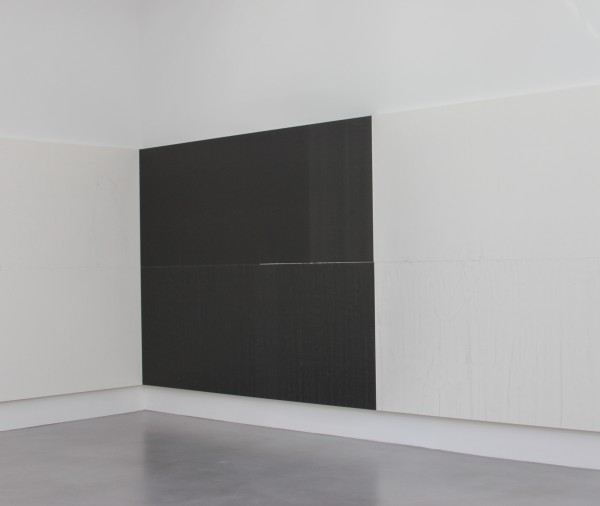 Wade Guyton’s first solo show at Petzel in seven years, which consists of five enormous, untitled ink-jet prints on linen, as well as one solemn replica in walnut veneer of the Carnegie Museum’s coat check counter, looks great. Mr. Guyton takes a 60-foot bolt of raw linen, folds it in half lengthwise and then runs it through an Epson 11880 using a wider version of the same digital black rectangle he had used for his 2007 show. The solid black continues for only a few feet; the remaining white linen is cut off to measure, so that the resulting painting, unfolded and hung horizontally with its shadowy, chalk-line crease at about eye level, will fill a particular gallery wall from edge to edge. The printer’s skips and struggles produce the organic imperfections that would once have needed a human hand: thin, white gaps in the black sections bring to mind fine men’s suiting, while smoky, not-quite-vertical streaks of residue in the white are like cracks in an ivory domino.

I believe in the artistic decision being made, as well, the significance of treating a complex, industrially produced machine as a singular given, and then subordinating it to a willful new purpose. Mr. Guyton is connecting the information age to industrial textile manufacture by way of the dot-matrix printer and taking on the troubled relationship between “brand” and “style” from a new direction. But while black-and-white has always been the characteristic palette of both printing and drawing, and one could argue that a monochrome block shows that mode most forcefully while also bringing in 100 years of related gestures from Malevich to Reinhardt and so on, the fact is that it would be just as easy, now, to print in color. Whether by Mr. Guyton’s own earlier work or by the printer itself, black-and-white has already been transfigured, and so between his powerful gesture and his beautiful work, there seems to be no relationship of necessity.