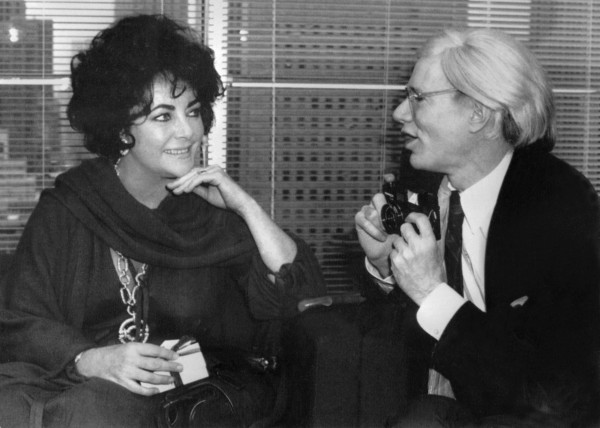 Elizabeth Taylor and Warhol in 1978 at Halston’s. (AFP/Getty Images)

Jonas Mekas, whom Mr. Fuentes represents, assisted with the shooting of Empire, and told The Guardian in 2012 how he got to know Warhol:

We became friends after Naomi Levine [one of Warhol’s ‘superstars’] invited me to his party and I realized it was the same white-haired guy who had come to sit on the floor and watch my films. I always remember that we went to see a La Monte Young performance where one note was stretched out to four or five hours. It was soon after that I helped Andy make Empire. Young was making time stretch in sound; Andy picked up the idea and repeated it visually.

When the gallery closes up for the day, a bit after 6 p.m., I’d advise heading over to La Monte Young and Marian Zazeela’s drone-filled Dream House over in Tribeca, to keep the repetitive vibe going, which has the added bonus of typically being pretty toasty in the winter. More of Mr. Young’s works are also on view up at MoMA in the John Cage-inspired “There Will Never Be Silence” show.