TRENTON – The Senate Majority Leader – who has a resolution before committee on Thursday asking Congress to re-examine the very law that created the Port Authority of New York and New Jersey – called the lack of accountability over what happened in September in Fort Lee “very frustrating.”

She made the comments Wednesday after new emails surfaced showing direct communication between a staff member in the governor’s office and a since-resigned Port Authority official over September lane closures that created massive gridlock at the George Washington Bridge.

The governor has consistently denied any involvement in the lane closures, which published reports linked to retaliation over the Fort Lee mayor not endorsing Gov. Chris Christie’s re-election.

“The governor is responsible for the people who work for him,’’ said Weinberg, who added she was disappointed in the Authority commissioners from New Jersey, some of whom she voted on as a member of the Judiciary Committee.

She went to Authority meetings last year seeking answers about who ordered the lane shutdowns and was stonewalled. She accused the Authority of a cover-up then.

“It took four months and a series of subpoenas to flesh this out,’’ Weinberg said. “The lack of accountability, beginning at the very top levels, is what I have found very, very frustrating.’’

The emails between Authority officials and administration personnel surfaced as part of a subpoena for documents issued by Assembly Transportation Chair John Wisniewski.

Ousted Authority N.J. appointee David Wildstein has been subpoenaed and is expected to appear before the Assembly committee Thursday.

Wildstein, a former PolitickerNJ editor, quit after the lane closures flared up into a controversy that also brought down another N.J. appointee, Bill Baroni.

The top N.Y. appointee, Patrick Foye, told N.J. lawmakers in no uncertain terms last year that there was no traffic study in Fort Lee, as the N.J. appointees tried to claim. And if there had been one needed, Foye said he would not have gone about it the way N.J. officials did.

SCR169, which Weinberg has before the State Government Committee, asks Congress to re-examine the very structure and management of the Authority.

Weinberg, who has been vocal in her questioning of the motives behind the lane closures incident, vociferously called for greater transparency in light of the revealed email exchanges.

“It’s time for everyone to come clean on what went on here. Residents in the state of New Jersey were being punished for some political reason, apparently,” Weinberg told PolitickerNJ.com. “That starts with the Governor’s office, works its way through the Port Authority commissioners and down to the people who apparently gave the direction to do this.

“If in fact they gave the order to do that, then the Governor is implicated either by being directly involved, or by having set up an environment that his staff felt free to do this kind of stuff,” Weinberg added. “People feel bullied. That’s not an atmosphere that New Jersey residents should be subjected to.”

Christie spokesman Michael Drewniak did not immediately respond to an email from PolitickerNJ.com seeking comment.

“It will be a tough November for this little Serbian,” replied Wildstein in an apparent reference to Sokolich.

Sokolich did not respond to a phone call seeking comment. Published reports said the closures were retaliation against him for not endorsing Christe’s re-election, which Christie has denied.

Bergen County Executive Kathleen Donovan, a Republican who is up for re-election this year, could not be immediately reached for comment.

Mark Bonamo of PolitickerNJ contributed to this story. 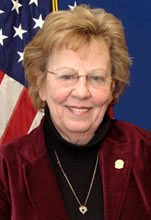