New York’s skies are officially for the birds.

“LaGuardia airport is ranked as the worst airport in America believe it or not,” Gov. Cuomo said. “That is a disgrace my friends and it is unacceptable and it is going to change. We need to modernize JFK and LaGuardia; we have talked about it for too long.”

Recently, the three airports have ranked low in studies regarding their amenities and delayed and cancelled flights, not to mention the protests regarding workers’ wages.

Yesterday, Michelle Schneider and her daughter, Isabella, flew into JFK from Billings, Montana to celebrate Isabella’s 16th birthday. Excited to begin their vacation, the two were stuck on the tarmac for almost half an hour. When they finally got off the plane, they found themselves in “little funnels that led to a gridlock environment.” At the baggage claim, they waited more than 45 minutes.

“It starts your vacation in a very negative way. In such a grand place, the airports should fit the bill,” said Ms. Schneider. “They’re asking for trouble.”

If a winter storm keeps passengers stuck in the airport overnight, LaGuardia and JFK travelers should pack their neck pillows. For the Newark flyers, congratulations, you can actually stay in a hotel without having to leave the airport.

Not only are travelers stuck in airports with very few entertainment luxuries, but the food options are fairly limited, in comparison to other airports. While JFK and Newark airports have an adequate amount of different types of food, La Guardia passengers are lucky if their terminal has an Au bon Pain where they can buy an overpriced sandwich to enjoy in the worn seats of the boarding area.

“We saw a few hot dog stands,” Ms. Schneider added. “They really should sell something that is not $9,000 for a salad.”

And if for some reason you miss your flight to New York due to crowded airports or overbooked planes, make sure your luggage doesn’t get on without you. If it does, it will only wait for you in NYC for a maximum of five days before getting sent back to one of the airline’s hub locations.

Maybe it’s time for our airports to pack their bags. 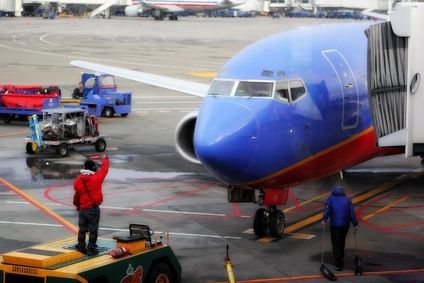