Want to orchestrate a meet-cute with Leonardo DiCaprio? You might try haunting Greenwich Village, where the mega-star just moved. Better yet, finagle an apartment in his building at 66 East 11th Street (provided you have upwards of $30 million to spare). After all, neighborly encounters have been a favorite of romantic comedy writers since at least Top Hat. Or maybe you’re just the kind of nosy, Star-clutching New Yorker who delights in living vicariously through famous people. Either way, Rentenna’s new celebrity map ought to prove useful.

Unsurprisingly, the rental website reveals that Brooklyn is where you’ll find an ever-increasing number of celebrities strutting nonchalantly around in $1,000 sweatpants and cashmere hoodies—stars, they’re just like us! Except for the fact that they’re way richer and better looking than us.

So as not to (presumably) encourage any stalkers of the hard-core (as opposed to the meandering tourist) variety, Rentenna doesn’t actually provide street addresses, but it’s a nice overview of where famous people like to congregate (as for the nitty-gritty details of celebrity dwellings, you can find those in The  Observer).

Besides the fact that everyone’s moving to Brooklyn, including Chloe Sevigny, who’s not on the map, despite having recently purchased a Park Slope co-op (to be fair, the deal didn’t close until December), the map also makes it abundantly clear that no one who is anyone is moving North of Central Park. (With the exception of Neal Patrick Harris.) Also, not popular—Fifth Avenue! Apparently those old-fashioned co-op boards still frown on “entertainers,” unlike their peers across the park who have learned to embrace the Hollywood set. But things are changing, as evidenced by the fact that the board of River House recently approved Uma Thurman, whose unsmiling visage you can find right on East 52nd Street. (Too bad her River House neighbor Henry Kissinger did not make the celebrity map cut.)

Rentenna compiles the date for its celebrity index, which helpfully tells you how close rentals listings are to famous people. For instance, the Westminster on West 20th Street in Chelsea has great transportation, 501 restaurants that will deliver food to your doorstep and Harrison Ford a mere two minute walk away. (Ira Glass is also nearby, but apparently public radio famous isn’t famous enough for the star map.) 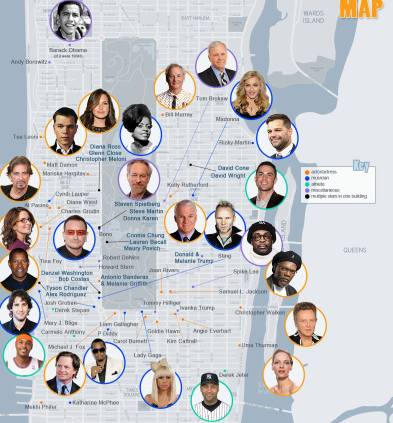