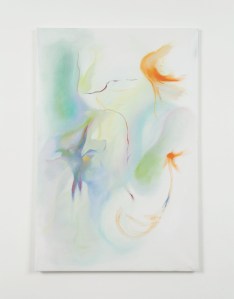 If painting is a way of storing time, as the German painter Jutta Koether argued in a recent lecture—artists building up marks over various durations to form a single image—then Whitney Claflin’s paintings show that process going haywire, shedding linearity and taking on a life of its own. Almost uniformly pared down from those in her past shows, these works often have just a few lines and wisps of paint on solid white grounds and seem to be in the midst of melting down or swirling into new compositions.

Ms. Claflin gets a lot done in her relatively small (most are 3 by 2 feet), swoon-inducing paintings, and you have to look all over the art-historical map to tease out reference points: Andre Masson’s quickest, most ecstatic drawings, the fleshy violet hues of Maria Lassnig, the hazy, surreal atmospheres of Yves Tanguy, Helen Frankenthaler at her airiest, Martin Barré’s simple but guileful lines, Charline von Heyl’s antic energy and Michael Krebber if he was compelled to keep going after making the few marks that adorn many of his canvases. 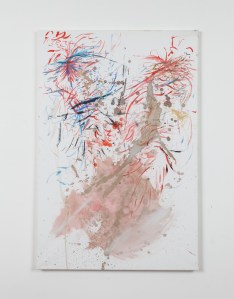 But those are only the most fleeting hints and quotes. Ms. Claflins’ paintings captivate because they occupy a none-too-easily-won space that is both splashily spontaneous and immaculately reasoned. Luminous red lines glide right next to drips of the same color that look haphazard and violent, like spilled blood. Wine has soaked one canvas, and wax has been dripped on another—moves that give the tiniest thread of narratives (bacchanalian, incantatory, pathetic) and remind you that these are just things in the world, objects to be used, adored, displayed, rethought. They’ve been worked on so that they can work on you.