“Either he doesn’t know what’s going on in his front office or he is lying on this,’’ Wisniewski said today. “What we’ve seen today is a sad day for New Jersey.  The documents that have been published are both shocking and outrageous.

“They show government at its worst.  They call into serious question the honesty of this governor and  his staff.”

He did say today that so far documents do not show a direct connection to Christie himself, but he emphasized this investigation into the closures will continue. Former N.J. appointee David Wildstein is fighting the subpoena, but Wisniewski said he expects that he will end up appearing before the Transportation Committee on Thursday.

Wisniewski said the kind of “crass indifference” shown in the emails to Fort Lee and to commuters is “sickening.’’ The closures caused massive gridlock at the George Washington Bridge.

He said the bulk of the emails appear to be between Wildstein, a former PolitickerNJ editor, and Bridget Kelly, a member of Christie’s staff.

“They seemed gleeful about it; they seemed somewhat pleased with themselves,’’ Wisniewski said, and then they “tried to sugar-coat it as some kind of (traffic) study.’’

Asked about what the silence from the governor’s office means, Wisniewski said, “I think they’re trying to come up with a plausible explanation for what happened today.”

He reiterated that the Port Authority is bigger than 26 states and that it’s disturbing an agency this large could be used for political purposes.

“If this could happen at the Port Authority how else has government been abused,’’ Wisniewski said. 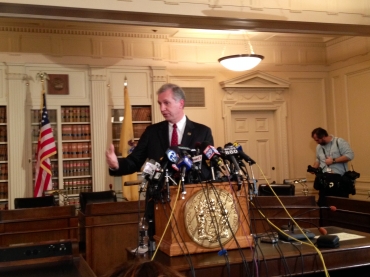