Last Monday at the Museum of Modern Art’s Celeste Bartos Theater, THE National YoungArts Foundation hosted a private screening of HBO’s Josh Groban: Sing Your Song, the latest episode of its Emmy-nominated series, YoungArts Masterclass. The documentary, which airs now through February, follows Mr. Groban as he conducts workshops with next-generation artists.

“What is so special about this particular episode is that Josh is the first YoungArts alum who is also an HBO YoungArts Masterclass teacher,” explained Paul T. Lehr, president and CEO of the National YoungArts Foundation. “Josh has this special way of bringing out the most in artists. It is a real honor to work with somebody who can have that effect on students.”

Mr. Groban, who spoke at a cocktail reception after the viewing, expressed enthusiasm about the experience.

“This was just as rewarding for me as it was for the students,” he told Shindigger. “I am honored to have been part of this process and look forward to seeing what the future holds for these exceptionally talented young musicians.”

Meanwhile, we got schooled in our own master class, as a tempest other than Winter Storm Janus popped into town: Carol Channing. The three-time Tony winner flew in from the West Coast for a double celebration of her 93rd birthday and the 50th anniversary of the premiere of Hello Dolly! which Ms. Channing performed on Broadway more than 5,000 times. Shindigger, a long-time fan of the saucy and spirited legend, spoke with her at Town Hall, where Justin Vivian Bond hosted the event.

“We recently watched your documentary [“Larger Than Life”] on Netflix,” Shindigger confessed. “Do you have a favorite among all the characters you’ve played?”

“Didn’t Dori [Berinstein, the director] do a great job?” Ms. Channing cooed. “Oh, she was so patient with me. What was the question?”

“Your favorite part,” we pressed, melting with glee.

“Well, as an actress, I’m a bit fickle. I’m always in love with the character I’m playing at the moment.”

So we asked her about Dolly: “What about the character lingered with you most?”

“It was a privilege to play Dolly,” Ms. Channing declared. “I am very grateful to Jerry [Herman] and David Merrick for giving me the opportunity.” Her warmest memories, however, were of her Dolly cast members, from those in the opening night performance at the St. James Theater to the final tour.

“They were and are the best part,” she mused. “It is so hard to keep in touch, and I often forget a name. … I’m turning 93 soon, and they say that is a good excuse, but I don’t think so. Anyway, we are connected in a way that only the word ‘family’ can describe.”

“And since you are turning 93, we need to ask, if you could get one birthday gift, what would it be?”

“Oh, I don’t need anything,” Ms. Channing purred modestly. “I can’t keep track of the things I have.” She did admit to liking the idea of having a telephone conversation without needing to ask her caller to repeat themselves: “Sometimes, I’ll realize in the middle of a conversation that I’m not talking to the person I thought I was.”

Shindigger gets that feeling every week.

For the show, Ms. Bond performed her repertoire dressed in a billowy, eggplant-hued frock, then changed during intermission into a Pucci dress to bring out Ms. Channing, who wore what appeared to be a white Chanel bouclé number. Ms. Bond began the performance with a small flub and joked, “As my friend Taylor Mack says, ‘Perfection is an asshole!’”

Mses. Bond and Channing were already acquainted with each other, having taken the stage together last summer at the Ice Palace in Fire Island’s Cherry Grove community as part of Daniel Nardicio’s “Icon Series.” Ms. Bond referred to that performance during the celebration at Town Hall, quipping, “You know, we hosted an event similar to this last August, except it was on an exotic island.”

Shindigger wondered if Ms. Channing could have had anyone present at the celebration, who she would have picked.

“My father and maybe Noël Coward,” she told us. “Noël told me I should always mentally put someone who loves me in the audience.” Perhaps that someone would have been her cousin Dickie, she hinted. “We grew up together, and he passed away recently. He was 99.”

“Will we see you at the Tonys this year?” Shindigger pressed, before our special moment concluded.

“Well, I don’t see why not,” Ms. Channing said, laughing. “I would love to do the Tonys again. I got to rap with LL Cool J a few years ago. I’ve tried to get in touch with him since then but haven’t been able to.” 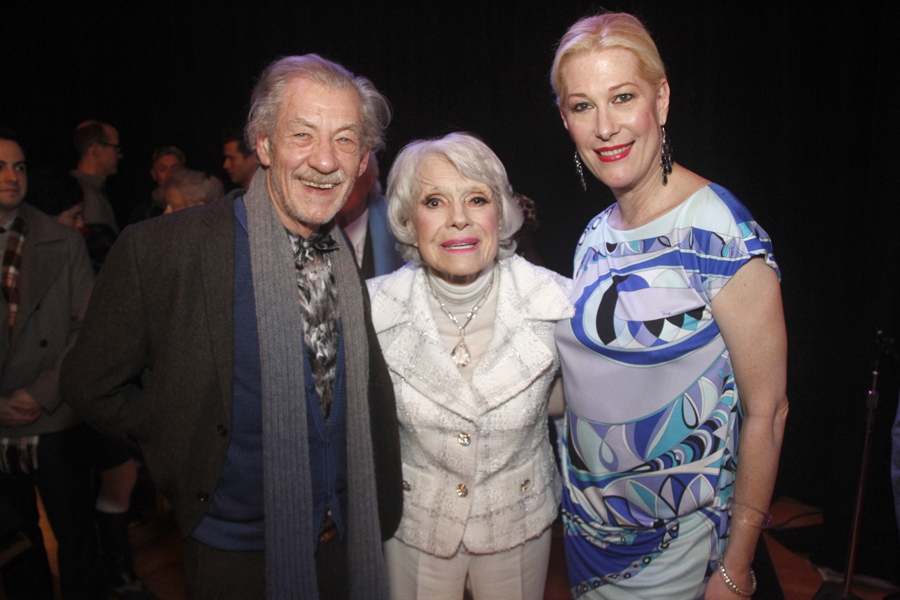