It’s been a big couple days for everyone’s favorite Taran Killam impression, Piers Morgan. On Tuesday night, the Brit had on trans advocate Janet Mock to discuss her new book, Redefining Realness: My Path to Womanhood, Identity, Love & So Much More. For those people watching at home, there might not have been any red flags that Mr. Morgan was crossing into the danger zone. A passing glimpse would have it appear that the interview, if not the most nuanced, was at least a sympathetic one. Mr. Morgan asked Ms. Mock how she had told boyfriends that she used to be a man. He told her she was attractive. For Piers Morgan, it wasn’t that bad of a show.

Later that evening on Twitter, all hell broke lose. That’s Ms. Mock was Orange is the New Black actress Laverne Cox, with a tweet they sent out during the show. They were referring to a chyron (that little piece of text that pops up on news shows that identifies the guest/segment), which had identified Ms. Mock at one point by reading “Was a boy until age 18.” The tweet that went out from his show during the interview also highlighted this point:

How would you feel if you found out the woman you are dating was formerly a man? @JanetMock shares her experience now. #RedefiningRealness

Along with Mr. Morgan’s phrasing of the question about how she broke the news to potential boyfriends that “you used to be yourself a man,” Ms. Mock and her followers took offense to being referred to as male, at any point in her life.

.@PiersMorganLive I was not “formerly a man.” Pls stop sensationalizing my life and misgendering trans women. #redefiningrealness

“He’s trying to do info-tainment…He doesn’t really want to talk about trans issues, he wants to sensationalize my life and not really talk about the work that I do and what the purpose of me writing this book was about.”

On Twitter, Mr. Morgan made the bad situation a billion times worse by striking out at Ms. Mock, and calling her behavior (not her, that’s an important distinction, Gawker,) “disgraceful”:

A lot of very irate people accusing me of ‘transphobia’ because I devoted a third of my show to @JanetMock ‘s inspiring story. Weird.

For the record, @janetmock had no problem at the time with our interview – but now seems keen to score cheap points. Very disappointing.

I’ll deal with you tomorrow night on air @janetmock – never been treated in such a disgraceful manner. Be proud.

Mr. Morgan, in true Keith Olbermann fashion, also went on to respond to anyone who was yelling at him on Twitter. At one point, he claimed to be the victim of “cisphobia.”

I fear I am now a victim of ‘cisphobia’.

This all could have ended in an ugly mess, especially in light of Grantland’s tragic mishandling of its feature about trans inventor Essay Anne Vanderbilt, which led to her suicide. Thankfully for everyone involved, Mr. Morgan saw an opportunity to get even more buzz, and invited Ms. Mock back on his show last night to air out their drama.
[protected-iframe id=”3d6da580684cae100510c2a83ac23e90-35584880-35147716″ info=”http://www.cnn.com/video/api/embed.html#/video/living/2014/02/06/pmt-intv-mock-i-was-born-a-baby.cnn” width=”416″ height=”234″ frameborder=”0″]

As Ms. Mock tells Morgan, her issue wasn’t with the interview itself, but with the framework (the tweets, the chyrons) and the way the show was produced. It’s an interesting point that kind of got lost in the ensuing drama, but Mr. Morgan himself did a fine job with the original interview, and he did right by putting Ms. Mock on a second time to have her tell the world why she was upset with the way the show came out. Sure, he took the low road, making it all about himself–“Why would you attack someone as sympathetic as me??”–but the fact remains that, perhaps sadly, that this was one of the better ways the press has handled its own trans-ignorance in recent memory. 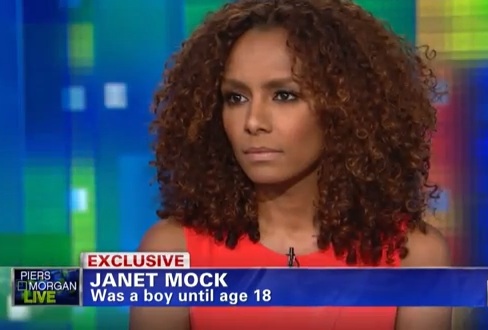