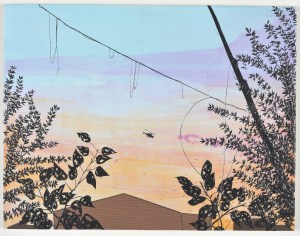 Ten years may be too soon to tell if the Artist Pension Trust, a program that allows fine artists to create a retirement account using their own artworks as assets, is a success, but at a decade old and halfway through its investment cycle, the Trust can make at least one boast: It’s bigger. Despite a certain apprehension on the part of some gallery owners (“I’m somewhat skeptical of the concept,” said Manhattan dealer Renato Danese. “It seems to raise more questions than it answers”) and a reluctance to find out more by others, the trust has grown significantly in terms of the number of participating artists (2,000, one-fifth of whom are in the U.S.) and the volume of artworks in its possession (more than 40,000).

Those artists in the program appear to be satisfied. “My experience with [the trust] has been wholly positive so far,” said Kim Beck, who lives in Pittsburgh and creates cutout sculptures and charcoal drawings. “It’s still a young organization, but I like the model and the direction it’s headed.” That view was seconded by New York City collage artist William Crump, who said, “Being selected for the Pension Trust gives me a sense of validation.”

The New York-based Artist Pension Trust, which was set up with the help of a group of 20-plus investors in 2004, combines the benefits of an individual retirement account and a private equity fund. Participating artists donate 20 of their works over a planned 20-year period (two per year during the first five years, one per year for the ensuing five years and one piece every other year for the remaining 10 years) to the trust. There are regional directors and selection committees, consisting of independent curators, artists and collectors but not dealers (“they bring a conflict of interest,” Moti Shniberg, a former high-tech entrepreneur and the chief executive officer of Mutual Art, the parent company of the Artist Pension Trust, said).

Those directors and selection committees invite local artists who have applied to take part in the program and who are deemed to have “talent and promise,” said David Ross, the director of a graduate program at the School of Visual Arts in New York City and a founder of the trust. The New York region consists of artists east of Chicago, while the Los Angeles branch focuses on the United States west of Chicago. Additionally, there are groupings of artists formed in London, Leipzig, Mumbai, Hong Kong, Shanghai, Mexico City and Amman, Jordan. Three of the last four recipients of the Turner Prize, an annual award given to a British artist under the age of 50, are participants in the trust.

The artworks in the trust are conserved in storage over the 20 years, although the idea isn’t to keep them hidden away. In 2013 alone, Mr. Shniberg said, 500 works from the trust were sent out to 200 exhibitions around the world. There have been loans to museums as well as festivals like The Venice Biennale, and Mr. Ross noted that works will be made available to scholars for study.

Twenty years is the operative number, but artworks in the trust may be put up for sale much earlier than that if market conditions are right, and, in fact, a few works have already been sold, Mr. Shniberg said, for significantly higher prices than when they were first put into the trust. (He declined to provide details on those transactions.) Those same regional directors and the committees they have set up would have an understanding of local market conditions and have contacts with institutions and private collectors, enabling them to gauge when to sell, at what price and to whom. Sales are likely to take place through galleries, rather than at auction, as there is a larger element of risk in public auction, such as a piece not selling, which becomes known throughout the art trade and may dampen enthusiasm for an artist’s work, and because dealers will aim for sales to museums and major private collections, which will add prestige to the artist’s work.

The proceeds of these sales are divided three ways: Twenty-eight percent is paid to the trust, helping to cover the costs of storage, conservation, insurance and transportation, as well as paying dividends to the outside investors, 40 percent goes directly into the account of the specific artists whose works were sold (“That’s fair; it’s like what they receive from a gallery,” Mr. Shniberg said), and the remaining 32 percent becomes part of a pool that will provide retirement income for all of the participating artists in a specific region, regardless of whether or not their work sells.

The Artist Pension Trust’s business model presumes a success rate of 3 to 5 percent of the artists in a given pool on the high end, with success defined as individual works in the trust reaching the $500,000 figure. If that 3 to 5 percent figure is reached, Mr. Shniberg said, both the artists and the investors will make money. Keeping artworks off the market allows artists to reap the rewards of their own art’s appreciation, rather than seeing that increase in value enjoyed solely by collectors. Similar to the artist resale royalty, a law that exists in many European nations, requiring artists or their heirs to be paid a percentage of the increased value of their work when sold on the secondary market, “the appreciation in value can be recaptured by artists themselves” who are participants in the trust, he said. However, unlike resale royalties, the individual trusts are for the mutual benefit of all the artists participating and will “help artists also who aren’t doing as well.”

That sounds a bit like share-the-wealth socialism for artists, but Mr. Shniberg prefers to refer to the pooled funds as “international risk diversification and mutual assurance. Artists may get attention now, but three to five years down the road, maybe there is less interest as fashions change. The market for one artist can go up, then down.” As individual artists place their work with that of others in a trust, they become less reliant on sales of their own work and can benefit in part as others in the pool see their work sold.

The pooling approach doesn’t sit well with everyone. David Ross noted that his original idea was for all the proceeds of sales of artwork be placed in the general pool, but a number of the artists he had approached, “who all believed that they were going to be successful in their careers,” were unenthusiastic about supporting less accomplished colleagues. “Dividing the profits—40 percent for the artist, 32 percent for the general pool—made the idea easier for them to swallow.”