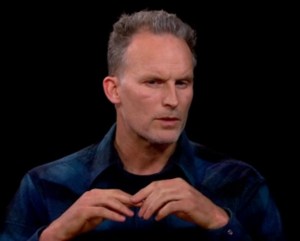 Matthew Barney was just on Charlie Rose (where things were much more amicable than they were with onetime Barney actor Richard Serra), where he said Norman Mailer actually came up with the idea for his new film, River of Fundament.

The artist said he’d “lost his way” with movies and wanted to do something operatic with his musical collaborator Jonathan Bepler. Norman Mailer invited Mr. Barney to France, where he was set to receive the Legion d’Honneur. Mailer, seemingly regarding the film dilemma, asked if Mr. Barney had read Ancient Evenings. Mr. Barney said he hadn’t. According to Mr. Barney, Mailer told him to read at least the first 100 pages saying something to the effect of, “I think there’s something in this for you, I think there’s a film in this for you.”

So fitting for a film about Mailer’s ego. See the interview below: