There is something romantic about the chug-a-chug sound and long swath of time watching the scenery go by that makes writers yearn for a sleeping car of one’s own, laptop in hand.

Maybe it’s because it harkens back to a simpler time, before social media and blog posts, when train travel was a glamorous way to see the country, a time when a train entering a tunnel served as a handy euphemism for consummating a marriage.

Despite the old-timey appeal of a lengthy train trip, Amtrak’s new writer in residence program actually started in the most modern way of all: a Twitter exchange between writers and the rail company’s publicity team.

In December, novelist Alexander Chee was asked in an interview about his favorite place to write. “I still like a train best for this kind of thing. I wish Amtrak had residencies for writers,” he said.

His comment prompted freelance magazine writer Jessica Gross to tweet about it. One tweet led to another, and in January, Ms. Gross found herself on the Lakeshore Limited, en route to Chicago, where she turned around and came back to New York City.

Last week, Ms. Gross recounted her trip in an essay on The Paris Review blog.

Mr. Chee will make the three-day trip from New York  to Portland in May. Both writers are the doing the test run for Amtrak’s writers in residence program, which is fitting considering that they are also the inspiration for it.

(We imagine that if this program gets off the ground, the New York-to-Portland route will be quite popular.)

“That struck a chord with me and many other writers—there’s something about the train that offers unparalleled space for writing, as well as reading and contemplation,” Ms. Gross said in a Q&A with Amtrak.

Of course, in addition to enthusiasm, Ms. Gross’ trip has prompted earnest speculation about whether a journalist can ethically accept a free trip, even one as wholesome-sounding as an overnighter to Chicago.

“Everything I wrote felt very genuine,” Ms. Gross told The New Yorker when asked about the uneasy relationship that could come as a result of accepting freebies. Besides, Ms. Gross said, she disclosed the nature of the trip and mentioned a five-hour delay.

Mr. Chee, asked by The New Yorker whether he felt that the residency was problematic, said, “Well, it could be—if there were conditions. But there weren’t.”

Judging by the robust response, there is more than sufficient interest from writers.

There is no real application process as of yet. Since the “test program” was set up through Amtrak’s social media team, the ad-hoc process currently entails tweeting at the train company with the hashtag AmtrakResidency. So far, there have been hundreds of tweets despite the fact that Amtrak hasn’t formalized the program.

If only a fraction of the writers who expressed interest over Twitter were accepted, the trains would be jam-packed with people finishing novels, screenplays and writing personal essays about their trips. Who knew that so many writers harbored the desire to ride the rails? 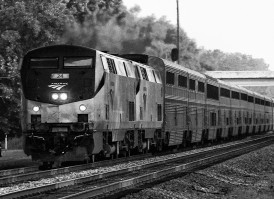