This week, Annie Clark, better known to the world as St. Vincent, celebrates the release of her fourth album, simply titled St. Vincent. (The album count doesn’t include Love This Giant, her superb 2012 collaboration with David Byrne.) Eight years into Ms. Clark’s career as a solo artist, general critical opinion of her seems to have solidified around one core concept: She’s another left-field, kinda arty, kinda wacky rock chick. NPR’s First Listen blog compared the new album favorably to Tori Amos’s From the Choirgirl Hotel, and the names of PJ Harvey, Björk and Kate Bush get tossed into the mix a lot too.

The problem with this, if you can call it a problem, is that it threatens to obscure a key aspect of Ms. Clark’s art. Like Ms. Amos and another pop provocateur of an earlier era, Prince, she’s a great instrumentalist. For proof, check out her live solo version of the Beatles’ “Dig a Pony” (above). I already knew Ms. Clark was good before hearing this, but the suppleness and confidence of her guitar playing on this song made me a convert.

As fine as St. Vincent the album is, it’s basically a twisted take on ’80s synth-pop and doesn’t offer much for the six-string enthusiast (though the brittle riffs on “Birth in Reverse” and “Huey Newton” compensate to a degree). I’m going to presume—hope?—that Ms. Clark’s fretboard prowess will be more on display when she takes the stage at Terminal 5 tonight to give the new songs their live premiere. 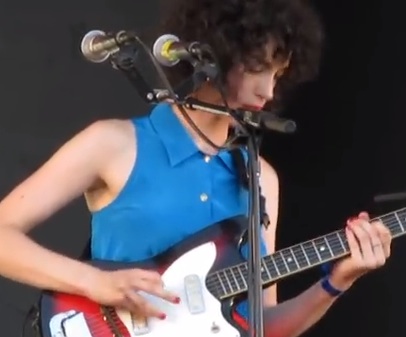